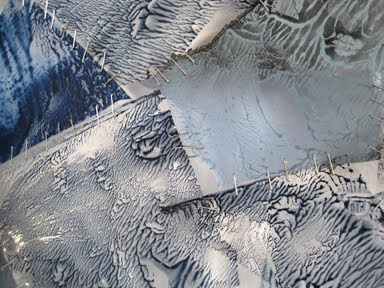 There were two reviews of the Deanna Krueger "Fields" Exhibition, which were published today... One in the Chicago Tribune and the other in Chicago Art Magazine. I wanted to share the latter, which was written by Caitlin Schriner. It reads as follows:


Gallery 180 is situated street view on the corner of Lake and Wabash. Next to the windowed Culinary Arts department of the Illinois Art Institute, the gallery draws crowds of viewers who wander past the whippings and mixings next door.

From outside Deanna Krueger’s collection Fields appear to be large-scale color-scapes on unscratched canvases. The colors are fluid and the spectrum well-covered over the seven piece exhibit. If you can find your way into the gallery (the entrance is located two window fronts down and through the admissions department) you’ll find that Krueger’s pieces are not paintings, but are rather mosaics created from reconstructed diagnostic film monotypes.

Held together with staples, the pieces lift from the wall and bring dimensionality back to the 2-D world of painting. The staples look like rudimentary stitches mending torn landscapes, recreating, as the title suggests, a collection of fields. With titles like Sencha and Elysium Krueger hints toward her inspirations. While the titles and their accompanying stories are interesting, with most of the traffic outside of the windows, they are only fruitful for those who manage to find their way into the gallery, and not fully necessary in order to enjoy the patchwork of color Kruger has filled the corner gallery with.

Overall the pieces are best suited to their location. While the materials are interesting, the true beauty in Kruger’s work is Monet-like, and found in distance. A treat for the Wabash foot-traffic, Fields will be on display at Gallery 180 at 180 N. Wabash through June 3, 2010. 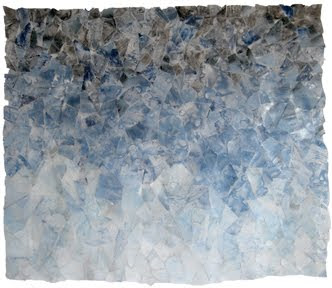 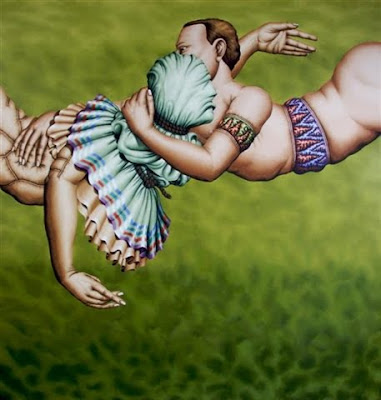 During one of my seminar courses in grad school, I was given an assignment to create a lecture on any topic within contemporary art. The professor thought it was important that we were able to present a lecture at a moments notice. Looking back, I realize that it was a way to get the grad students familiar with what was happening in the Chicago art market. I remember making my way downtown to the River North gallery district in Chicago, where I became acquainted—and latter obsessed—with the work of an artist named Robert Lostutter.

It was the late eighties and more than a decade had passed since Lostutter had completed the Dutchman series… a body of work presenting entangled, masculine bound and hooded acrobatic figures. He had moved on to a more subtle presentation of hidden-passion resulting from societal prejudice. The work of the late eighties presented brightly colored images of men with bird-like features. Even with this new visual language, it was obvious to me that the elaborately detailed feathered faces were symbolic of the masks we use as a means of survival… a persona, which veils reality.

Lostutter’s work inspired me. I used his observations as a jumping off point to create a series of pieces, which I titled “Uniforms”. That series was the basis of my graduate school experience. Briefly, the Uniform series was a symbolic presentation of abstract portraiture. It explored the idea that we are constantly trying to evoke the illusion that our insecurities are non-existent. We create protective barriers—or uniforms—to deflect society from the space within.

Roughly twenty years have passed since grade school. My work has changed dramatically, yet I continue to follow Lostutter’s career. His work still inspires me.

Well, last week, I received a phone call from a friend informing me that one of Robert Lostutter’s Paintings—from the Dutchman series—was going up for auction. It was “Dutchman 3” from 1974. I was intrigued. I have a Lostutter lithograph in my collection but here was an opportunity to actually own one of his larger canvases. Why was it at auction? …And why was the posted value so low? …Did they not know what they had? I took the evening to establish how much I could afford. The next morning, I made a call and placed my blind bid. I hoped that this masterpiece would go unnoticed by the affluent. It didn’t. On Sunday afternoon, I was informed that the painting was sold for more than three times my bid. The piece is worth much, much more. 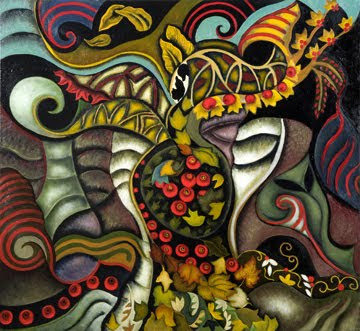 I receive dozens of packets containing exhibition proposals each year. They sit in a box next to my desk, waiting for a day that I find some time to explore their contents. I've begun opening only a few in a sitting, which allows me to fully focus on the work and to consider the appropriateness of the content for the upcoming exhibition season at Gallery 180.

Well, Frances Cox sent me a proposal—back in March—which highlighted some of her new work. Being familiar with her imagery—I have a piece in my personal collection and have acquired another for the school's collection—I was intrigued to review the current paintings. After a review of the enclosed CD, I sent off an email expressing my interest and scheduled a future studio visit.

Well that meeting happened this morning... and it was refreshing. As I entered Cox’s new studio at the Greenleaf Art Center, I looked around the room and saw that there were some new things happening. Cox seems to be exploring some new color palettes as well as variations on her two-dimensional compositional format. She has begun creating some flat color areas, which offer the viewer a place to rest before moving on to explore the next area of pattern. And on some of her larger canvases, she seems to be playing with space to produce a three-dimensional, environmental quality. The work is evolving and it’s wonderful. Keep an eye out for an upcoming solo exhibition at Gallery 180 in 2011 or 2012. 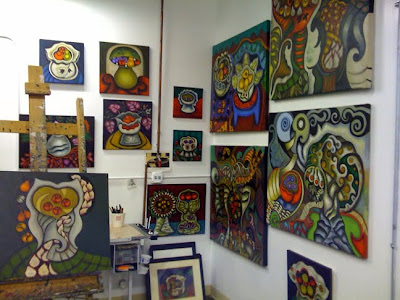 A Review of the Krueger Exhibition at Gallery 180 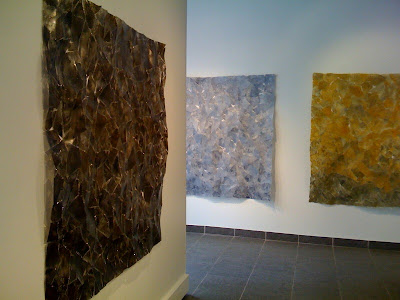 There was a wonderful review of the Deanna Krueger Exhibition, currently on display at Gallery 180 of The Illinois Institute of Art-Chicago. The review was printed in the May 6th edition of NewCity and was written by Critic, Michael Weinstein. From the website:

"In a tour de force of extreme transformation, Deanna Krueger appropriates diagnostic MRI films, rips them into shards, staples them together, and overlays them with monotypes to produce glistening abstractions in red, ice blue, gold, gray, brown and tea green. From a distance, Krueger’s photo-works are assertively attractive by virtue of their jagged textures and glass-like surfaces, but on closer inspection they reveal worlds teeming with detail that never betray any pattern or overall meaning, but involve the eye in the plays of line and form in each sector of the surface. Krueger drapes her works unprepossessingly on the gallery’s walls without frames—anything more would detract from their self-standing integrity. She titles them with references to astral bodies, flora and precious stones, but viewers are better off ignoring that new-age flourish and looking instead for the way that they open the doors of perception to exquisite psychedelic experience."

Gallery 180 of The Illinois Institute of Art-Chicago is located at 180 N. Wabash—at the corner of Lake and Wabash—in Chicago's Loop. The Krueger exhibition runs through June 3rd.
Posted by Chuck Gniech at Wednesday, May 05, 2010 1 comment: