The Importance of "Breaking Criminal Traditions" 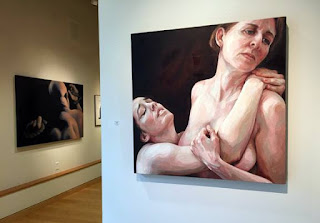 
Following is a wonderful article by Elana Knopp of the Union News Daily. The article discusses the importance of the "Breaking Criminal Traditions" exhibition, which has been on view at The Human Rights Institute Gallery of Kean University in Union, NJ since June 2016. The exhibition closed eariler this week.


An exhibit highlighting human rights abuses around the globe, “The Art of Influence: Breaking Criminal Traditions,” opened this month at Kean University’s Human Rights Institute Gallery. The fine art exhibition, featuring the work of 24 artists from around the country, calls attention to the ongoing ancient rituals that kill or maim millions each year, yet are not considered crimes.
The Human Rights Institute Gallery at Kean University is located at 1000 Morris Ave., Union. “The Art of Influence: Breaking Criminal Traditions” runs through Dec. 16.


The exhibition debuted in 2013 at the IIT Chicago-Kent College of Law and brought topics such as honor killing, child marriage and acid violence into public consciousness and into public debate. The exhibit continues to expand and evolve, with a unique presentation designed specifically for Kean’s Human Rights Institute Gallery.

Cheryl Jefferson, executive producer of Breaking Criminal Traditions, said that when she first learned of the scope of these human rights abuses, she was driven to learn more. “This resonated with me so fiercely,” Jefferson told LocalSource during a phone call. Jefferson [said] that since 2013, the exhibit has evolved. “With each show, we try to add more layers,” said Jefferson. Curator Chuck Gniech chose approximately 50 pieces of fine art in a variety of mediums.

Gniech, curator at the galleries of The Illinois Institute of Art, Chicago, told LocalSource that his background in creating exhibits benefiting nonprofit organizations such as Heartland Alliance and Worldview Education and Care was a good fit for the project. “My history as a curator — creating shows with underlying human rights themes — and the numerous artists with which I’ve worked — made my inclusion in the project a perfect marriage,” Gniech said.

Gniech said that once Jefferson defined each of the human rights topics addressed in the exhibition, he searched for fine art pieces that alluded to the issues at hand. “With a unique version of the exhibition presented at each new venue, I explore the human rights topics conceptually,” Gniech said. “This is a conscious choice. There is plenty of very dark and horrifying work that many would assume would be perfect for the show. But my intention is to present approachable work with multiple levels of symbolism and meaning. The work becomes a jumping-off point for discussion — the means to begin a dialogue, expanding awareness and promoting change.

According to Gniech, all of the criminal traditions represented in the exhibition are still practiced today — in various cultures — although sometimes by another name. “Here in the United States, honor killing is simply referred to as murder,” Gniech said.

As provocative as the exhibit is, said Gniech, the works are approachable and thought-provoking. “There is nothing visually shocking or gory,” Gniech said. “I would want the viewer to understand that — perhaps, other than the work created by Richard Laurent, Teresa Hofheimer and Zoria Miller — the art that they are experiencing was not actually created by the artists to represent the criminal traditions.” 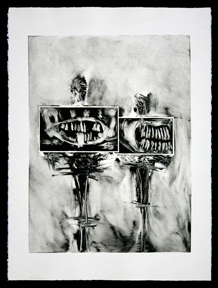 Gniech cites as an example a work by artist James Deeb entitled, “Silent Witnesses.” “It is a Monotype that was developed from James Deeb’s interest in medical and dental x-rays,” Gniech said. “I found it appropriate for inclusion in the exhibition due to the implied content — the use of figurative abstraction with an emphasis on the bone structure of the mouth. Deeb has created a graphic image that alludes to the silencing of the repressed. But the tortured mouths seem to scream with tension.”

As the exhibition’s curator, said Gniech, it is his interpretation of the work that ‘implies’ the issues on exhibit. “The works are a representation of the traditions used to begin a discussion of human rights issues,” Gniech said. “It’s a daunting task, but bringing awareness to these global issues is the intent. We believe that awareness is the first step toward change. And I believe many of these issues are coming to the forefront of social conscience.”

Janice Kroposky, director of the Holocaust Resource Center at Kean U., told LocalSource that she worked closely with Neil Tetkowski, director of Kean University Galleries. “We use a two-pronged approach to exhibition selection,” sais Kroposky. “First, we look for work that reflects both the mission and goals of the Kean University Human Rights Institute. Second, we identify exhibitions that lend themselves to the creation of programmatic opportunities for discussion. Art has the power to introduce difficult issues through an alternate lens.”

Kroposky said that the pieces selected for the exhibition offer a portal of interpretation that ultimately leads directly to critical discussion of the issues represented. “Those of us who work in the field of human rights education do know about the issues,” Kroposky said. “However, to the first-time viewer, the topics addressed can certainly be disconcerting. The acts, taken as a whole, are perpetrated globally, including some occurring in the United States.”

According to Kroposky, educating the broader community is the first step in raising awareness. “Many of the issues represented in ‘The Art of Influence: Breaking Criminal Traditions’ that affect humanity globally, also occur in the United States,” she said. “When these issues occur in the United States, they may not be recognized as the same. Therefore, educational opportunities provide the framework for sparking activism. There is no way to predict if an individual might be motivated to advocate for change, but the art gallery provides an opportunity to ignite the spark.”

Kroposky asserts that the exhibit looks at practices that are accepted in some cultures, while not accepted in others. “The traditions examined in the exhibition have been, and continue to be, monitored by major human rights groups because they pose physical and emotional harm. Judging other cultural norms can be a dangerous thing, therefore, it is imperative to support individuals or groups who are advocating for change within the practicing group.”

The vision of the Kean University Human Rights Institute, Kroposky said, is to promote understanding and tolerance across ethnic, racial, religious and other barriers, as well as to inspire action.

One of the works in the exhibit that stands out to Kroposky is a piece called, “Holiday in Fallujah,” by artist Dominic Sansone. “I interpret the work as a call to recognize that regardless of where we live or who we are, we share the common bond of humanity,” said Kroposky.

Jefferson, a participant in the United Nations Commission on the Status of Women, noted that the global reach of these complex human behaviors extends to the United States. “The exhibit allows us to take the first step toward change and to support the legal evolution that can only come from within other cultures and our own,” she said. “We forge ahead. I really believe we can keep hammering away at this.”