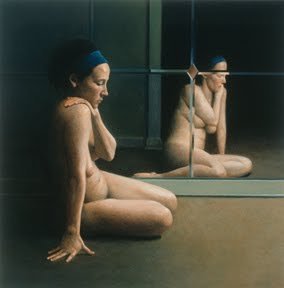 The work of Kenju Urakubo will be included into the upcoming "human" exhibition at Gallery 180 of The Illinois Institute of Art-Chicago. Opening to previews on January 16th—with an Opening Reception on Friday, January 20th from 5:30-7:30—the human exhibition is composed of work created by twenty artists from around the country. Commissions from the sale of work will be donated to Heartland Alliance. Two of the paintings included in the exhibition are from New York painter, Kenju Urakubo. His work—images of the female nude reflected onto mirrored walls of beveled glass—are beautifully painted. Urakubo explains:

Willem de Kooning’s painting “Pink Lady” has always hunted me in my mind. I am especially interested in the chaotic relation between the human figure and the straight line of the door and window, found in this painting. Influenced by de Kooning’s work, I create paintings that explore relationships between the organic human form and the sharp, hard edges of the environment. My paintings emphasize the contrast between these elements. The portrayal of a hard-edged glass wall, surrounding the human figure, is not typical of the traditional western painting—rather—it relates to the landscape found in conventional Japanese wood cut prints.

Join us for "human", which opens to previews on January 16th. Gallery 180 is located at 180 N. Wabash—at the corner of Lake and Wabash—in Chicago’s Loop. The gallery is open Monday through Thursday from 8am-8pm, Friday 8am-5:30pm and Saturday 9am-5pm. Additional information can be found at gallery180.com.

Kenju Urakubo came to the United States in 1970 after studying oil painting and graduating from Tama University of Fine Arts, in Tokyo, Japan. Urakubo’s exhibition list begins in the early 1960’s—being widely exhibited and having earned numerous awards. Some recent exhibitions include, a 2008 four-artist invitational at the Art Association of Harrisburg, and solo exhibitions at The Hoyt Institute of Fine Art in New Castle , Pennsylvania [2006] and The International Museum of Art at El Paso, Texas [2005]. Urakubo’s work is in the collections of Chase Manhattan Bank, NY, Nippon Express USA, NY and The International Museum of Fine Art, El Paso, TX. Urakubo is represented by Gallery H in Three Oaks, Michigan.