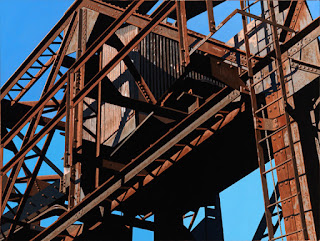 Roland Kulla is one of four painters included in "Hyperreal" at Gallery 180 of The Illinois Institute of Art-Chicago. The exhibition presents imagery of objects, selectively-composed and realistically-rendered to intensify their visual impact.

Kulla, a Chicago resident, has been painting bridges—or segments of bridges—for more than two decades. His paintings have been presented on the main stage art scene with recent solo exhibitions in Berlin and New York. Created in the last few months, three new Roland Kulla paintings are included in Hyperreal at Gallery 180 of The Illinois Institute of Art-Chicago. In discussing his work, Kulla elaborates…

“I’ve used bridges as my primary inspiration for the last twenty years. Based in Chicago, I began my exploration with the world’s largest collection of bascule bridges. In 2006, I began to branch out to other “bridge cities” including Boston, New York City, and Pittsburgh. In 2011, I explored the bridges in Berlin, Germany.

I select certain design elements and eliminate background context in order to emphasize form. The details of massive structures reveal the many individual components. What may appear to be a random arrangement of bolts and rivets has, on close inspection, a rigidly patterned logic. Abstracted from their surroundings, the bridges take on new aspects. Some look dangerous, others elegant. The forms are presented in “natural” bridge colors in bold contrast to the voids that they span. They float in light that plays across the surface details. The variations can be simple or elaborate, ranging from limited themes of a few notes to grand, fugal extravaganzas.

The subjects are painted to look “real”, but this is a deliberate illusion. I paint an idealized version of reality on a scale that allows the viewer to enter into the structure and appreciate the monumentality of the form.”

Hyperreal will be presented at Gallery 180 of The Illinois Institute of Art-Chicago through February 28, 2013 with previews beginning on Monday, January 14th. An Opening Reception will take place on Friday, January 18 from 5:30-7:30 pm. All works are available for purchase. Gallery 180 is located at 180 N. Wabash—at the corner of Lake and Wabash—in Chicago’s Loop. The gallery is open Monday through Thursday from 8am-8pm, Friday 8am-5:30pm and Saturday 9am-5pm. Additional information can be found at gallery180.com