Ginny Mangrum ~ Selections from the Collection 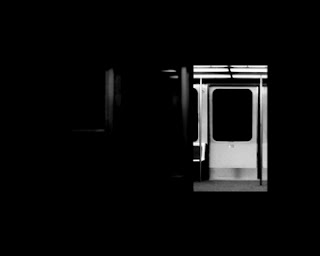 Included in the current exhibition—"Selections from the Collection" at Gallery 180 of The Illinois Institute of Art-Chicago—is a digitally enhanced photograph from film by Ginny Mangrum, titled "Subway". The moody, high contrast image was purchased from the "photo '11" exhibition, for inclusion into the School's permanent Fine Art Collection. Mangrum's work from this series eliminates references to society, inviting the viewer into an unsettling environment. Mangrum explains...


“Subway”, is an image from the “Night Moves II” series. This series of black and white, digitally enhanced film photographs, examines the psychological associations existing within private and public places photographed without people. These voyeuristic observations are shot at night to emphasize an unsettling tension. Elements are isolated from surrounding activities, containing them within a portal and framed by a large darkened canvas. Because signage and identifying information has intentionally been eliminated, the image delineates the vulnerability of the space, and infuses it with suspense—waiting for something to happen.

"Subway" is just one of fifteen pieces selected to be exhibited in the final exhibition at Gallery 180 of The Illinois Institute of Art-Chicago. The exhibition is scheduled to continue through July 8th. Most of the collection can be viewed at gallery180.com

Gallery 180 is located at 180 N. Wabash—at the corner of Lake and Wabash—in Chicago’s Loop. The gallery is open Monday through Thursday from 8am-8pm, Friday 8am-5:30pm and Saturday 9am-5pm. Admission is free.

Labels: Gallery 180, Ginny Mangrum, selections from the collection, The Illinois Institute of Art-Chicago