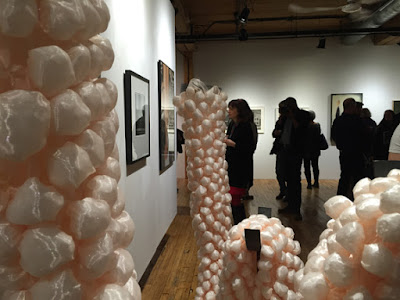 The 4th Annual Bridgeport Art Center Competition opened last Friday night with an energetic, well-attended reception. The Exhibition—Juried by Mary Ellen Croteau and William Lieberman [Zolla/Lieberman Gallery]—is one of the best group exhibitions that I’ve seen in awhile. With a balanced array or imagery from abstraction to realism—including both two and three-dimensional work—the show presents a visual consistency with fluid transition from one end of the gallery to the other. The audience is engaged with each work-of-art offering a new adventure… yet—visually—connected to the pieces prior and post. Due credit should be given to Curator, Lelde Kalmite.

I was taken with the show from the moment I entered the forth-floor gallery. I did a quick scan of the room… said hello to some colleagues and then went off to explore. I circled the room once—to get an overview—then again, more slowly, to intently examine each piece.

Included in the exhibition is a wonderfully ornate canvas by Zachary Williams, titled “The Ocean’s Wide”. Combining the ideas of the horror vacui—reminiscent of Dubuffet—with the surrealistic melting clocks of Dali, Zachary Williams creates an elaborate composition of unrecognizable objects that make the unreal, real. An unusual seascape, Williams presents a tightly knit wall of mesmerizing elements that encourage the continued exploration of his unconventional world. 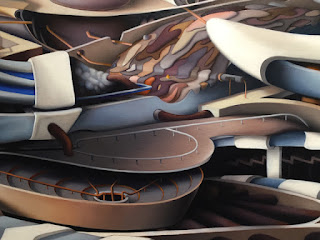 Also included in the exhibition is a 40-inch square photograph [on canvas], titled “Adieu! [Greta Rupeika]” by Carol Estes. The image is startling, yet oddly beautiful. It presents a woman hovering in a shallow pool of water… her seemingly lifeless hand visible just below the surface. She wears elegant horns and dried foliage in her braided blond hair. The beautifully haunting image is reminiscent of a still from a Julie Taymore film. 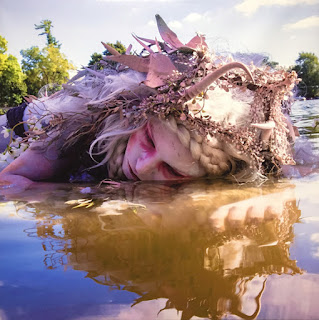 One of the more poetic works in the show is an untitled handmade paper, ink, thread, and fabric piece by Yoonshin Park. With a history of book art and creating works-of-art with paper, Yoonshin Park offers a series of conceptual pieces as metaphor for the chapters in a life… the ebb and flow of memories like waves in the ocean. From a recent artist statement, Park explains…


“…As the water rises and falls, pages of our daily experience add and subtract to and from our memory. Our daily life permeates our memory just as the ink is absorbed into each page and creates new shapes and patterns onto what once was a clean slate of a blank page.” 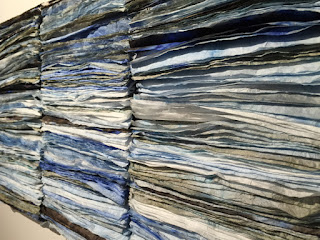 The show includes some beautifully fluid sculptural works as well: A floating steel and chain piece by Michael Grucza, titled “Ball and Chain”, A burlap, wood and wire, wall piece, titled “Arpillers” by Marcus Alonso, and an intestine-like fiber piece titled “Polyps” made of steel, organza and plastic, by Molly Ann Wood. There are also two intimate hand carved limestone pieces by June C. Flnnegan that are exceptional. Both sculptures embrace the stone material of their creation and evoke a soothing visual sensitivity. “Grounded in the Garden” is the flatter of the two and “The Butterfly’s Garden” the more dimensional. These forms present the organic characteristics that are found in nature and tempt the caress of the onlooker. 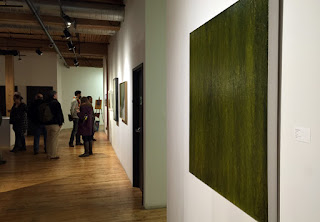 The 4th Annual Bridgeport Art Center Competition continues through April 1 and is located in the forth floor gallery at 1200 W. 35th Street, Chicago, IL 60609. Gallery hours are Monday through Saturday from 8am – 6pm and Sunday, 8am – 12noon.

Mary Ellen Croteau received a BFA from the University of Illinois at Chicago in 1990 and a MFA from Rutgers University in 1998. She has lectured and exhibited internationally. Croteau has won numerous awards and has been reviewed and reproduced worldwide in books, magazines and on television.