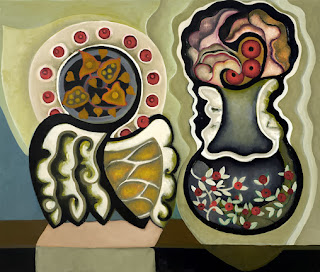 Last week, I received an email from Frances Cox inviting me to her Rogers Park studio. The invitation was an offer to preview a series of paintings that she created for an upcoming exhibition. I accepted.

The solo exhibition—titled “Still Life Portraits”—will be presented at the Renaissance Court Gallery of the Chicago Cultural Center from December 13th through January 26th, 2014. The Opening Reception is scheduled for Friday, December 13th from 5-7pm. You should plan to attend. This is a “must see” exhibition.


“When I look at plant forms, I view them as botanical singularities having the characteristics of other living things.”

Her ornate images guide the viewer on a journey through the picture plane—exploring gestural botanical forms and structures alluding to humanity. The images are sometimes a singular “figure” while others define relationships.

The most current images are brilliant. Cox has pushed her color palette to explore stronger contrasts—making the images pop off the surface of the canvas. The glistening oil shimmers with fluid emotion created through a combination of silhouette and beautifully modeled forms. The mixture of modulation lends to the complexity of the elaborate compositions. 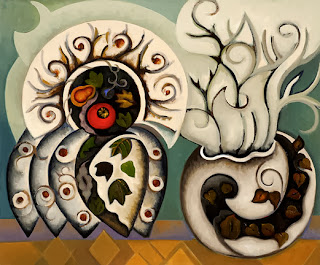 Join me at the opening reception of Still Life Portraits on Friday, December 13th from 5-7pm. The Renaissance Court Gallery is on the first floor of the Chicago Cultural Center, located at 78 East Washington Street in Chicago. 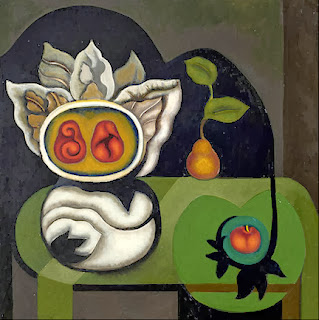 Frances A. Cox, White Vase with Hanging Pear, oil on canvas, 28" x 30"
Frances A. Cox was raised in Chicago, IL, graduated from Marquette University and attended the Art Institute of Chicago. Her work has been exhibited in many state group shows as well as regional juried exhibitions across the Midwest and has earned numerous awards from Midwest Museums of Art.