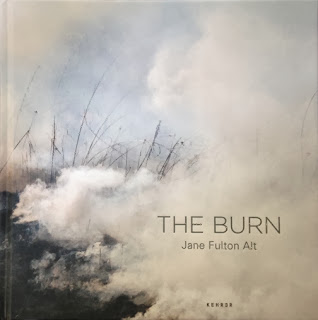 Last night, I attended the book signing reception for The Burn, a newly published book presenting the work of award-winning photographer, Jane Fulton Alt. The event took place at the DePaul Art Museum and was hosted—in part—by the Ragdale Foundation. The DePaul Art Museum is relatively new to the city—it opened in the autumn of 2011. Located on Fullerton Avenue in Lincoln Park, the museum is easily accessible by public transportation [CTA brown and red line trains] and street parking was abundant. If you have the opportunity, take the time to experience this venue.

To give a little background... The Burn series of photographs are a mystical journey into the place between life, death and rebirth. The images depict the beauty, violence and regenerative power of controlled prairie burns. Alt first experienced a prairie burn during an artist residency at Ragdale in 2007. Since then, she has documented the Lake Forest prairie burns each spring and fall.

Last night's book signing event was beautifully choreographed. When we arrived, we were confronted with a larger-than-life video presentation of a prairie burn. The images flickered across a large wall and the crackle and snapping of burning wood was heard in surround sound. The numerous people in the room, sipping wine and conversing, created a surreal experience... As though we were attending a cocktail party in the burning wilderness.

The evening paused to include a presentation by Alt, defining her journey as a photographer. Clearly inspired by the mysteries of life and death, Alt began her talk by presenting a projected image of a face emerging from a pool of water. She pointed out that the image represented both the emergence of life—the first breath, as well as the cold, lifelessness of a death mask.

Alt's journey has taken her from photographing the birth of children to the last days of hospice patients... slaughterhouses and autopsies... exploring the holy cremation site of Varanasi and the Day of the Dead celebrations in Mexico. She has even photographed the result of Hurricane Katrina. But each of her images seems to include an element of hope and rebirth.

If you missed last night's event, Jane Fulton Alt will be speaking in Evanston, Illinois at Perspectives Gallery on Sunday, January 12th at 4:30 pm. If you have an opportunity, try to attend. You won't be disappointed. Jane Fulton Alt is multifaceted, has a powerful story and is an amazing public speaker. December Book Release / Speaking Engagements include venues in San Francisco and New Orleans. Additional information can be found at janefultonalt.com