The exhibition catalog... The Art of Influence: Breaking Criminal Traditions at The Gallery at Penn College 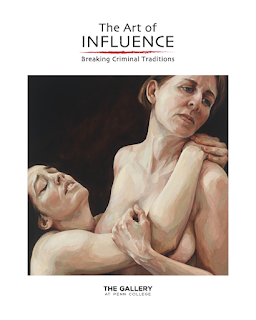 Opening January 15th, at The Gallery at Penn College in Williamsport, Pennsylvania, is an elaborate new version of The Art of Influence: Breaking Criminal Traditions. This unique exhibition boasts a beautiful thirty-six-page color exhibition catalog highlighting each of the exhibiting artists, a beautifully-written introduction by executive producer, Cheryl Jefferson, and my curator notes. These notes simply offer insight into the exhibition with a brief overview of some of the included works of art. I have chosen to share those note here.

The Art of Influence: Breaking Criminal Traditions is an exhibition addressing a variety of human rights issues. These atrocities include acid violence, stoning and honor killing as well as the more common tragedies that we see on the evening news... human trafficking, child marriage, and the rise of Fascism. This collection of work has been brought together with the intent of beginning a dialogue about these hard-to-discuss topics.

Each object in this collection offers multiple levels of interpretation. Most of the pieces were not created specifically to represent the criminal traditions, yet they were chosen because the content alludes to the issues at hand—offering an opportunity to begin a non-threatening dialogue, create understanding and seek resolution.

As the exhibition’s curator, I interpret the criminal traditions based on works of art that offer conceptual, symbolic, and metaphorical content. For example, the typical viewer might see In the Middle by Teresa Hofheimer, as a painterly study of a crouching male in a minimal, high-key setting. The freely painted nude is placed in the upper portion of the composition with the illusion of space only implied through subtle tonal changes of an almost white background. 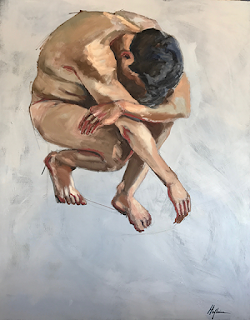 But Hofheimer’s image is more than just a passionate representation depicting a love for the male form. The image speaks to the psychological pain inflicted on the perpetrator of an honor killing. Honor killing is the murder of a family member by relatives who believe that the victim has shamed or violated the family’s honor. The murderer is typically a young man who is expected to defend the family’s pride. In the Middle is symbolic of the psychological torture imposed on the executioner. The figure’s pose amplifies the impossible choice—torn and confused by the horrifying request of his family.

Honor killing may be the result of common behaviors. Outside of Western cultures, women and girls have been honor killed for wearing makeup, using technology, reading, or any reason the men of the family may choose. Gay men have been victims as well. In some Middle Eastern countries, men are thrown to their deaths from rooftops based on the presumption of being homosexual. The stark background of Hofheimer’s painting may be interpreted as the intended cleansing—or at the very least—symbolic of the attempt at reestablishing purity.

By taking the legal stand of “defending the family’s honor,” killers typically go free. Those imprisoned are treated as heroes. The psychological effects on all involved result in a society immersed in shame and fear. But in the 21st century, can murder truly be justified by beliefs passed down from a repressive male-dominated society? 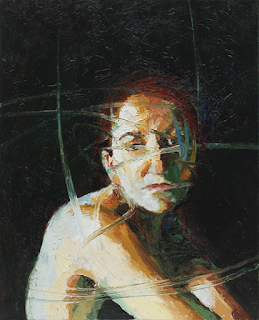 Joyce Polance addresses personal authenticity in her work. She defines it as a willingness to be vulnerable and exposed, revealing the experience of inner chaos. Her paintings express pain and suffering on a visceral level. Although not addressing a specific criminal tradition, Polance’s imagery conveys the agony of repression. Her painting, titled Fault, is an image of pure emotion and inner rage. The intimate canvas presents a distraught female nude emerging from darkness. Perhaps in shock, the figure is almost lacking facial expression. Her vacant eyes suggest that she is numb to her surroundings. She embraces her legs—tightly holding them to her chest—seeming to be contemplating her predicament. She mutely stares back at the viewer, silently screaming to exist. Desperate slashes violate the image, ripping at the pigment’s surface. This imagery seems to address the debilitating fear, imposed anguish, and brutal repression of people—of women—throughout the world. 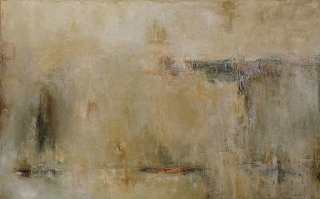 Interpretation is somewhat expected when approaching abstract art. Both splendor and agony are found in the abstract paintings of Anne Smith Stephan. With thinly dripping paint that sometimes builds to heavy impasto, these beautiful canvases offer unique environments to explore. A calming ethereal atmosphere is created with numerous layers of pigment that conceal a deeper message. Like an archaeologist, digging and scraping, the artist seems to be excavating—uncovering elements of a not-so-distant history. The rich and compelling multi-layered surfaces can be interpreted as exposing the physical and psychological wounds of life.

The works included in this exhibition may be interpreted on many levels. Although all are beautiful at face value, this collection is intended to touch the viewer’s mind and soul by highlighting the challenges faced by our global community. The hope is that these paintings, drawings, and sculptures will inspire discussion that supports positive social change.

A reception for The Art of Influence: Breaking Criminal Traditions will be held at The Gallery at Penn College on Thursday, February 7 from 4:30-6:30pm. I will be presenting some additional insights in a gallery talk which is scheduled for 5:30pm. The gallery at Penn College of Pennsylvania College of Technology is located at one College Avenue in Williamsport, Pennsylvania 17701.