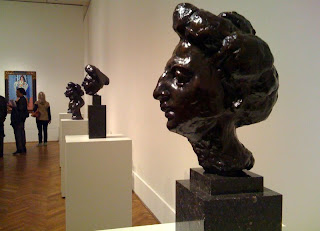 The Matisse Exhibition, at The Art Institute of Chicago, will open to the public this Saturday. The exhibition previewed today for members. To be clear, it’s a wonderful exhibition.

The show titled “Matisse: Radical Invention”, covers the work he created during the five years between 1913 and 1917. From the Institute’s web site, the exhibition “…examines what is without question the most innovative, momentous, and yet little-studied time in the artist’s long career. Nearly 120 of his most ambitious and experimental paintings, sculptures, drawings, and prints from the period are on view.”

“Rigorously purged of descriptive detail and sharply composed, the works Matisse produced between late 1913 and 1917 are among his most demanding, experimental, and enigmatic. While these works have typically been seen as unrelated responses to the influences of Cubism and World War I, this exhibition illustrates the deep connections between them and their critical role in an ambitious, cohesive project of developing what Matisse called “the methods of modern construction”—a process in which the act of creation itself was the main focus.

Unlike his earlier art, which was characterized by rich color and arabesque line, these new paintings, sculptures, prints, and drawings are often rigorously abstracted, heavily reworked, and dominated by black and gray. Canvases typically show a multitude of paint layers and a nearly sculptural approach to scraping and incising; sculptures display a remarkable emphasis on geometry and structure; prints reflect and reinform the incising and scraping that the artist devised for his paintings; and drawings are frequently composed of a network of erasures and stumping, and elegant, spare line.”

Truly a beautiful exhibition, the work is presented in a series of open and very manageable rooms. Stephanie D’Alessandro, Gary C. and Frances Comer, Curator of Modern Art at the Art Institute of Chicago, and John Elderfield, Chief Curator Emeritus of Painting and Sculpture at the Museum of Modern Art, New York, curated the show.

Take the time to see this exhibition. It’s quite amazing. The show continues through June 20th.
Posted by Chuck Gniech at Friday, March 19, 2010 1 comment: 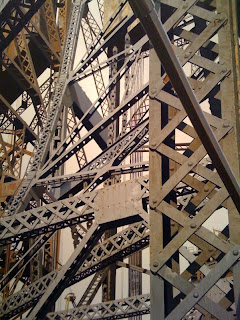 This past weekend, I went to New York to attend the opening reception of a painting exhibition by Chicago Artist, Roland Kulla. A long time friend, I've watched Kulla’s imagery evolve from simple graphic elements to obsessively complex patterned structures. For more then a decade, his passion has been the steel structure of bridges. He has found inspiration in the bridges of Boston, Pittsburgh, Chicago, and New York—creating bodies of work on each subject. This current body of work, titled “Urban Patterns,” is Kulla’s continued exploration of the built environment. The works idealize and celebrate society’s structural accomplishments. Kulla is obsessively passionate of “the monumentality of the forms and the creativity necessary for their existence”.

Roland Kulla’s exhibition will run through April 17th and may be seen at the George Billis Gallery, 555 West 25th Street, New York. If you are unable to see the exhibition in person, you can review the work at: georgebillis.com. Older works can be seen at: rolandkulla.com… Enjoy! 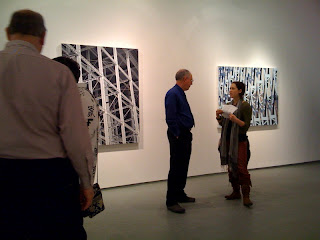 Above: Kulla discusses his work with a patron.
Posted by Chuck Gniech at Monday, March 15, 2010 2 comments:

Jon W. Balke... In the Absence of Color 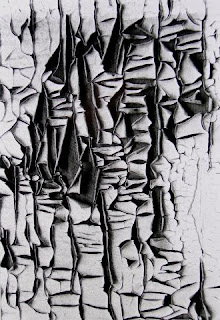 I work downtown in Chicago’s Loop, just steps away from Millennium Park, The Art Institute of Chicago, and The Chicago Cultural Center. Occasionally before classes—or when I just want to clear my head—I’ll walk over the Cultural Center and explore the latest exhibit. Today was one of those days.

The Cultural Center usually presents a number of wonderful exhibitions. One of the exhibitions—currently on exhibit—is a show of brilliantly rich black & white photographs which can be found in the Renaissance Court Gallery. The show titled “In the Absence of Color”, is the work of the self-taught photographer, Jon W. Balke. Balke creates environmental images with a large format camera and develops the prints in his darkroom using the traditional silver gelatin process. Balke’s black & white prints capture the natural world with amazing lighting and force the viewer to explore the elements of texture, line, surface, and pattern. The above image, "Peeling Paint" is one of the more abstract images in the exhibition. Many of the pieces are direct nature studies.


From the materials that I read while in the gallery, Balke studied darkroom techniques with Ansel Adams & John Sexton, and photographic composition with Willard Clay. If you have an opportunity to visit this show, you will not be disappointed. The imagery is really quite wonderful. The show continues through March 21st. The Chicago Cultural Center is located at 78 E. Washington Street in Chicago. You can also review Balke’s work on line at: balkephotography.com