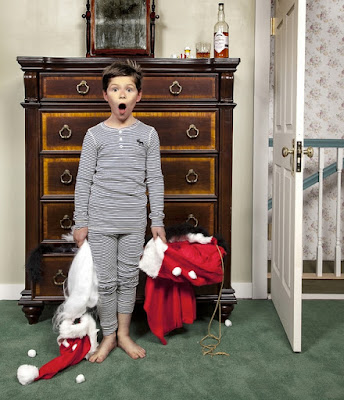 Maggie Meiners "The Truth about our Parents"

In December of 1956, the cover of The Saturday Evening Post presented an image of a shocked young boy in his pajamas—after apparently riffling through his Father’s bedroom dresser drawer and finding a Santa Clause suite. Clutching the beard of the costume in one hand and the furry cuff of the jacket in the other, it seems that the child has come to the realization that Christmas will never be the same again. The image is a coming-of-age story—one that we’ve all experienced, at least conceptually.

Norman Rockwell created this illustration—one of hundreds that adorned the cover of The Saturday Evening Post over a period of forty-seven years. Beginning in 1916, Rockwell’s iconic imagery of Americana was etched into the public’s mind. He painted moments that were understood, whether it was a child’s visit to the principal’s office or the obligatory family photo at the Thanksgiving dinner table. Rockwell was skilled at creating timeless snapshots of life with which most of society could identify. But for better of worst, our world has changed drastically over the past century. And with those changes, our societal development has become fodder for a new perspective on Americana… Enter contemporary Photographer, Maggie Meiners.

Maggie Meiners latest collection of photographs, titled “Revisiting Rockwell”, explores and reinterprets America in the 21st century. With a series of sixteen photographs, Meiners addresses how our society has evolved. She uses complete honesty and—as Rockwell did—clever humor when defining the commonplace moments within our lives.

In Meiners’ updated version of the boy discovering a Santa Clause suite, a subtle change in the props seems to be enough for Meiners to make her point. The remnants of a bottle of bourbon, a partially filled glass and some pill bottles replace the smoking pipe that are found on top of the dresser from the Rockwell version. The irony here is that not much has really changed… it’s just that Meiners is transparent with her depiction of our self-medicating society. 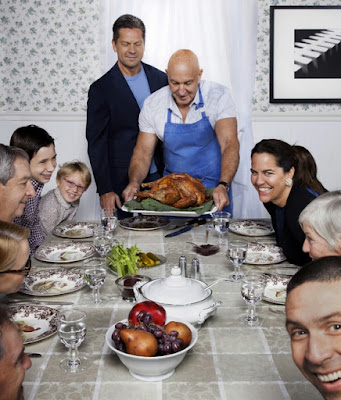 But Meiners does take on more controversial subjects including Same Sex Marriage. She explores a new twist on Thanksgiving dinner, sidestepping the socially accepted family to present the more realistic, modern family. Using Rockwell’s Thanksgiving image titled “Freedom from Want,” Meiners replaces Rockwell’s hosts—an elderly man and women—with a middle-aged gay couple… And yet the guests at the dinner table look like any other genetically related family. With ten percent of the population being homosexual, Meiners again is pointing out the obvious, preverbal “elephant in the room”. 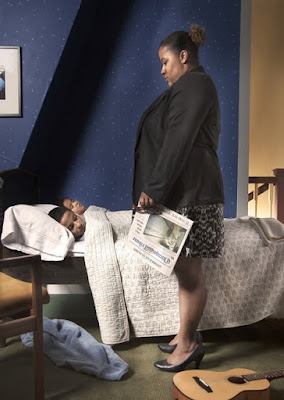 Current events seem to emerge throughout the exhibition—as Meiners addresses the topic of gun violence. She compares the escalating terror found on the streets of Chicago with the fears that confronted society during World War II. Meiners transforms Rockwell’s "Freedom from Fear" of 1943 into her contemporary image titled "Cock, Bang and Repeat". With areas of the city being transformed into war zones, it’s common for the evening news to lead with a series of stories on inner-city gun violence. Meiners’ makes an obvious comparison to the fears that parents feel in keeping their children safe during turbulent times.

The Rockwell version presents both parents tucking in the children for the evening... allowing them a reprieve from the daily reality of war. The parents concerned for the safety of their children. In Meiners’ version, a single Mother stands over the children, holding a copy of the Chicago Tribune Newspaper—the story reporting on the latest’s series of shootings. Meiners points out…


“I am not sure what the solution is, but I am sure that if we embrace the idea of humanity, foster discussions about our similarities and differences, and listen to one another's personal stories, perhaps we can find a way to respect the lives of one another despite resentments, anger, stress and misunderstanding.”

The Anne Loucks Gallery in Glencoe will be presenting the complete collection of “Revisiting Rockwell” created by photographer, Maggie Meiners—opening with a reception for the artist on Thursday, May 5th from 5-8pm. The exhibition continues through June 10. Anne Loucks Gallery is located at 309 Park Avenue in Glencoe, Illinois. For additional information, visit loucksgallery.com

Maggie Meiners tends to see form and art in something most people would not, and brings it to light in a photograph. It doesn’t necessarily matter what the subject is, but whether or not it is open for interpretation. Her compositions are direct, to the point of appearing minimal, while her subject matter, conversely discloses significant complexity. Her work appears in numerous collections, some of which include, The Illinois Institute of Art-Chicago, Harrison Street Lofts, and Wheaton College. Additionally, she has been recipient of numerous awards and prizes, including the 2009 Ragdale Prize.

Born in Chicago, Illinois, Maggie Meiners had a suburban upbringing, graduated with a Bachelor of Arts in Cultural Anthropology from University of Colorado-Boulder, and a Master of Education degree from De Paul University in Chicago, Illinois. She now resides outside of Chicago.
.
Posted by Chuck Gniech at Saturday, April 23, 2016 No comments: