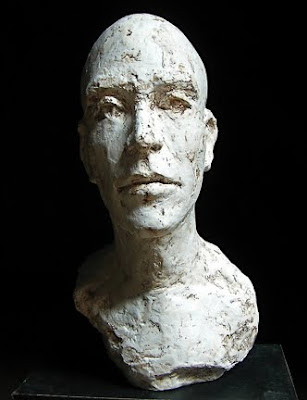 Gallery 180 of The Illinois Institute of Art-Chicago presents: “human", a collection of fine art, from around the country, that explores the human form as well as the human condition. The exhibition includes a variety of painting, drawing, photography and sculpture. Commissions from the sale of work, included in this exhibition, will be donated directly to Heartland Alliance for Human Needs and Human Rights which provides life changing opportunities to people around the world who are homeless, seeking safety or living in poverty.

The plaster-sculpted self-portrait, by Benjamin Fedosky [shown above], is included in the “human” exhibition. The piece was inspired by a trip to the ancient city of Pompeii. Fedosky explains…

Displayed among the ruins were plaster casts made from the bodies buried in volcanic ash. These stark and evocative artifacts impressed me immensely. Upon returning home, I began working in directly modeled plaster. This technique involves building a form that is both modeled and carved as the plaster sets until the sculpture is finally realized. The work began as a study of my face. The face quickly became a head, then a bust, developing over a month’s time through a concentrated dialogue between the process, subject, and materials.

“human” will be presented at Gallery 180 of The Illinois Institute of Art-Chicago through March 1, 2012. Previews begin on January 16th with a catered Opening Reception scheduled for Friday, January 20th from 5:30-7:30pm. All works are available for purchase. Gallery 180 is located at 180 N. Wabash—at the corner of Lake and Wabash—in Chicago’s Loop. The gallery is open Monday through Thursday from 8am-8pm, Friday 8am-5:30pm and Saturday 9am-5pm. Additional information—and images from the exhibition—can be found at gallery180.com.

Benjamin Fedosky is a sculptor and painter living in Berkeley, CA. He studied at the University of Wisconsin-Milwaukee from 1997-1999 and has since developed a self-directed approach to his art and studio practice. Working primarily with the sculpted human form and the painted landscape, Fedosky uses suggestive modeling, active surface treatments, and expressive mark-making to create evocative works that pursue the essence of subject and form. Fedosky has exhibited in solo and group shows throughout the U.S. and in Canada, and his works are held in selected private collections. 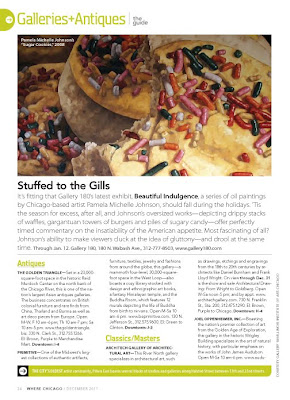 The above image is a page from the December issue of "Where" magazine, Chicago. It highlights the imagery of Pamela Michelle Johnson, currently on exhibit at Gallery 180 of The Illinois Institute of Art-Chicago

If you haven't had the opportunity to experience the large scale food paintings, you have only a few more days. The exhibition closes on Thursday. Galley 180 of The Illinois Institute of Art-Chicago is located at 180 North Wabash, which is the corner of Lake and Wabash in Chicago's Loop. See gallery180.com for details.
.
Posted by Chuck Gniech at Tuesday, January 10, 2012 No comments: