Frances A. Cox: The Human Side of Botanics 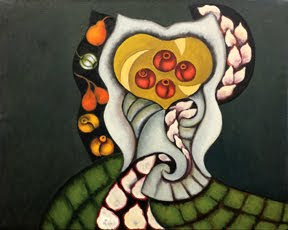 Gallery 180 of The Illinois Institute of Art-Chicago will present the work of Frances A. Cox from September 14 - November 11 with a reception scheduled for Friday, September 17th from 5:30-7:30.

I spent some time with Cox in her studio a few weeks ago—selecting the pieces to be exhibited for this show. The pieces are a collection of oil paintings which introduce the viewer to an abstract-surreal reality where inconspicuous portraiture is composed of plant and still life forms. Cox utilizes these forms to create her own secretly significant visual language. This personal language—comprised of a variety of recognizable components and a vivid color palette—becomes the focus of each canvas as the subtle reference to the human form recedes.

Cox explains, “When I look at plant forms, I view them as botanical singularities having the characteristics of other living things. I transfer to plants, metaphors for human feelings and appearances.”

The work of Frances A. Cox will be presented at Gallery 180 of The Illinois Institute of Art-Chicago through November 11th. An Opening Reception will take place on Friday, September 17, 5:30-7:30 pm. This exhibition is free and open to the public. All works are available for purchase. Gallery 180 is located at 180 N. Wabash—at the corner of Lake and Wabash—in Chicago’s Loop.

The gallery is open Monday through Thursday from 8am-8pm; Friday, 8am-5:30pm and Saturday 9am-5pm.
Posted by Chuck Gniech at Monday, August 30, 2010 No comments: 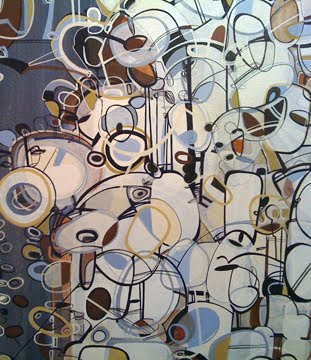 Above is a detail of one of the paintings in progress. The Rebecca Moy exhibition will be presented at Gallery 180 of The Illinois Institute of Art-Chicago in November. It’s a show that shouldn’t be missed. I’ll keep you posted.
Posted by Chuck Gniech at Friday, August 13, 2010 No comments: