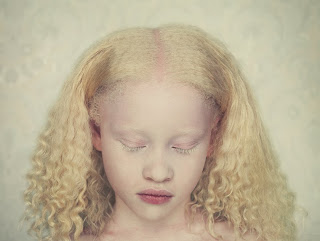 There is an amazing photographic exhibition currently on view at the Catherine Edelman Gallery in River North. “Albino” is a series of classic photographic portraits by Brazilian artist, Gustavo Lacerda. The work captures the segment of the population born melanin defect, resulting in the loss of pigment in the skin, hair and eyes.

Lacerdo presents his subjects in front of soft muted backgrounds, which emphasize the subtle pigments of the figures. He explores the beauty of innocent children [being children] to the not so typical, single and group portraits. The Victorian inspired “Thyfany II” [2009] and the playful “Livia” [2009] are standouts. 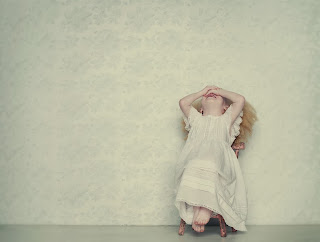 Gustavo Lacerda works and lives Sao Paulo. His series, Albinos, has received critical praise and was recently featured on Huffington Post and Wonderland Magazine and is included in the Musée du Quai Branly Collection (Paris, France) and the Sao Paulo Museum of Art (Sao Paulo, Brazil). A monograph on Albinos is in production, and will be released at the end of 2013 by Editora Estudio Madalena.
Posted by Chuck Gniech at Tuesday, December 17, 2013 No comments: 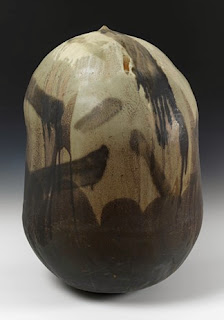 This is the final week to visit the Paula Kloczkowski Luberda and Michael Van Zeyl exhibition at Gallery 180 of The Illinois Institute of Art-Chicago. The exhibition features Kloczkowski Luberda's coil built, abstract stoneware vessels along side of the figurative and still life paintings of Van Zeyl.

The abstract stoneware vessels created by Kloczkowski Luberda address the material source as concept itself—exposing and embracing the subtle flaws of the medium. Not mass-produced by machine, the subtle imperfections make reference to our own humanity... expressing strength, power as well as vulnerability.

The classical imagery of Michael Van Zeyl explores the human form as well as traditional still life. The subjects are rendered within a painterly atmosphere—where light defines form—to create compositions of classic mastery. 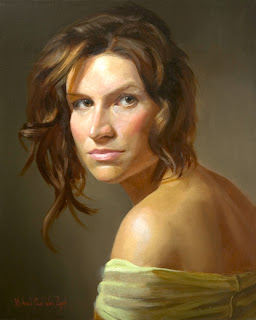 The work of Michael Van Zeyl and Paula Kloczkowski Luberda will be presented at Gallery 180 of The Illinois Institute of Art-Chicago through May 2, 2013. All works are available for purchase. Gallery 180 is located at 180 N. Wabash—at the corner of Lake and Wabash—in Chicago’s Loop. The gallery is open Monday through Thursday from 8am-8pm, Friday 8am-5:30pm and Saturday 9am-5pm. Additional information can be found at gallery180.com
.
Posted by Chuck Gniech at Monday, April 29, 2013 No comments:

Sheila Ganch ~ One of the Chicago Six 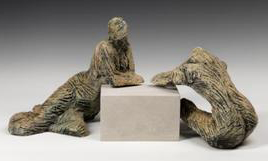 For sculptor Sheila Ganch, Chicago resonates in its people, a pair of them bent over a table in thought, sorting through their relationship with one another: their synergy, their diversity, their geography, their city.


On April 4th, I missed the opening reception of “Chicago Six” at Chicago Art Source... I was "stranded" at a swimming pool in South Florida. I returned to Chicago early that evening—very tan—but too tired to attend a reception. A few days later, I made it over to the Chicago Art Source gallery, to explore the exhibition. I found that the "Chicago Six" are: Lynn Basa, Sheila Ganch, Michelle Gordon, Eric Holubow, Kristen Komar, and Mark Philips.

The show is defined by geography. Those included are Chicago Artists—the only constant in the exhibition. The show presents a range of very approachable imagery created through a wide variety of media. There is something for everyone. Consisting of mostly two dimensional work, the stand out pieces are the earthy figurative sculptures of Sheila Ganch. Her ceramic materials are sculpted, textured, and pigmented, to produce thought-provoking and inspirational images of humanity. The beautifully created abstractions work well along side the abstract oils of Michelle Gordon and the safer encaustic imagery of Lynn Basa. It's worth taking a few minutes to stop in and explore the exhibition. The show provides an  opportunity to make multiple purchases. 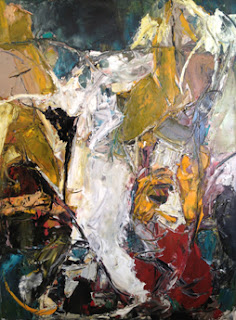 “Chicago Six” continues through June 22. Chicago Art Source is located at 1871 N. Clybourn in Chicago. The gallery hours are Monday through Friday 10-6 and Saturday 10-5. Free parking is available across the street.


Sheila Ganch received her degree from Ohio State University, but considers her postgraduate training with other fine sculptors to be the reason for her success. Her work has been exhibited at the Bellevue Washington City Sculpture Show, The Fort Wayne Museum of Art; Fort Wayne, IN, The Chicago Cultural Center, The Illinois Institute of Art-Chicago, The Harold Washington Library; Chicago and Veridian Gallery; New York. Ganch is currently represented by Gallery H; Three Oaks, Michigan, and The Chicago Art Source Gallery; Chicago.
.
Posted by Chuck Gniech at Wednesday, April 17, 2013 No comments: