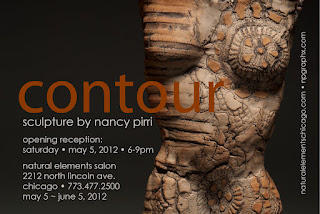 Next Saturday, May 5th, Natural Elements Salon will be hosting a reception from 6-9pm for Nancy Pirri as she presents "contour". Pirri has been included in numerous exhibitions, as well as presenting work at the recent "... Art of Human Rights" event to benefit Heartland Alliance. Her figurative sculptures incorporate  beautiful symbolic patinas. Pirri explains:


The theme of my work is about woman’s struggle to find emotional balance. Each one of us is born with strength, compassion, and the incalculable ability to endure, fulfilling complex roles as mother, daughter, sister, friend, lover or wife, where we are called upon continually to put others before ourselves. Add to that society’s expectations, calling for poise and grace, the women I create openly reveal themselves, showing depth, emotion, and even scars from past experiences. Using texture, expression, attitude and gesture, I primarily sculpt in clay, a.k.a. Mother Earth. I employ a variety of deliberate techniques to further enhance a sense of earthiness and antiquity. Random yet controlled applications of colored slips, glazes, and various firings including soda reduction, further enhance these textures, as if you could suddenly unearth them from history.

Nancy Pirri's exhibition continues through June 5th. The Natural Elements Salon is located at 2212 North Lincoln Ave., in Chicago. Check out Pirri's web site at: npgraphx.com and link to her blog for additional updates.


Nancy Pirri was born in Brooklyn, NY, and currently lives in Chicago, IL. She has dabbled in every art form since childhood, discovering clay to be her true passion in 1991. She just finished a solo show titled “Reflection,” in Lafayette, IN, followed by a 3-person show at the Beverly Arts Center in Chicago, IL with Pop Artist, Peter Mars and Urban Artist, Erik DeBat. Pirri received an Honorable Mention award from the Rockford Art Museum for her printmaking on clay work. She exhibits at many different venues including galleries, charity auctions, private homes, and group shows. Nancy Pirri is represented by Studio b in Three Oaks, Michigan. 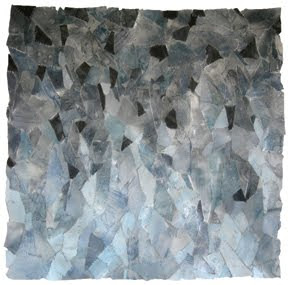 One of my favorite artists, Deanna Krueger, is going to be exhibiting some new work at the ZIA Gallery in Winnetka. The exhibition runs from May 4 through June 16 with an Opening Reception on Friday, May 4 from 5-7:30... so save the date. Deanna Krueger will be presenting her Acrylic monotype-mixed media pieces, along side the Pop-inspired, mixed media works on paper, created by Carl Wilen. It should be a wonderful exhibition.

If you don't know of Krueger's work, she produces powerful mixed media forms created from recycled medical diagnostic film layered with monotypes. The film is torn, repositioned, and then stapled together to create multi-faceted surfaces. These semi-reflective surfaces create a mesmerizing, gem-like appearance. Krueger explains:

I work abstractly at the juncture where sculpture and painting intersect. The resulting pieces are hybrids. The process for my current series begins with recycled medical diagnostic film layered with acrylic monotype prints. The film is then torn apart and the shards are reconnected into new configurations using thousands of staples. The visual aesthetic is at once high-tech and primordial. It evokes a multitude of associations: aquatic life forms, otherworldly geological formations, surreal vegetation, scientific images of the miniscule, visions of the cosmos. I am interested in humanity’s search for meaning in this life, and in the pleasure to be found in the various manifestations of that search.

Don't miss this exhibition. The ZIA Gallery is located at 548 Chestnut Street in Winnetka. Additional information can be found on their web site at ZIAgallery.net
.
Posted by Chuck Gniech at Friday, April 20, 2012 No comments: 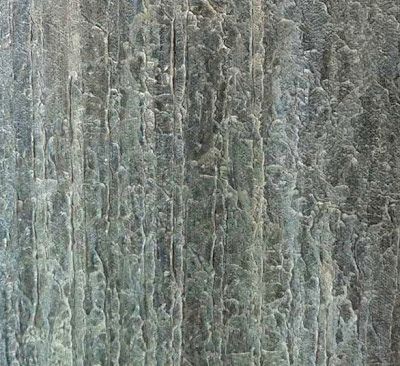 Gallery 180 of The Illinois Institute of Art-Chicago will become a meditative setting of reflection as it presents the intriguingly-intricate paintings of Chicago artist, Charles Gniech, alongside the bold and fascinating sculpture of Corinne D. Peterson. With decades of research between them, the work of these two fine artists focuses on markers of time and transition influenced by the prehistoric stone circles and megaliths found throughout Europe. 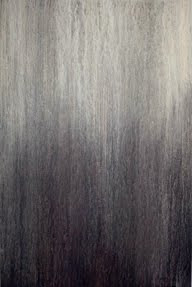 Charles Gniech’s work has been influenced by the megalithic stone circles of Great Britain for more then twenty years. This latest body of work explores the meditative qualities of the fluid surface patterns found on many of the monuments. Like that of Agnes Martin and Mark Rothko, the imagery conveys the serene qualities of meditation and inner peace. Gniech explains…

I have spent the past two decades exploring the meditative qualities of the prehistoric stone circles of Great Britain. Britain is littered with more than four hundred and thirty of these prehistoric sites... most people are familiar with Stonehenge, yet there are areas concentrated with megalithic structures as far to the north as the Scottish Islands, and as far to the south and west as Cornwall.

My latest body of work is influenced by the meditative qualities of the fluid surface-patterns found on some of these monuments. I have taken artistic liberties in the replication, manipulation and abstraction of the surface patterns, yet the work continues to convey the serene qualities regularly associated with nature and inner peace. 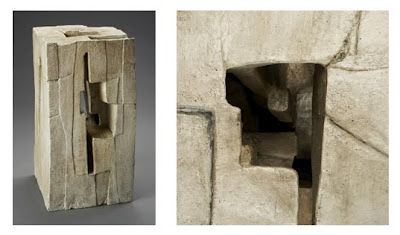 ...art making is a force for exploring connections: between past and present, between opposing forces of nature, between intellect and subconscious, and between myself and clay.

I draw inspiration from architectural and natural structures, such as the ancient standing stones I’ve seen in France and England. As I sculpt the clay, I attempt to be open to the universal forces behind their existence. I do this in an effort to understand how such forces shape contemporary experience. My sculptures with openings to the inside give me an opportunity to contemplate complexities of interior life in contrast to the outer form.

Nature has always been a primary source of pleasure in my life. Working with clay connects me to my early roots of growing up on a Minnesota farm. Cracks, fissures, scars and pools of glaze are all part of my personal artistic vocabulary. The colors I use come primarily from rocks, leaves, and other bits of nature I’ve collected and studied since childhood. I use layers of color and often fill the cracks with dark tones for a sense of age. I intend for each work to expose the evidence of its own history, much as people reveal an accumulation of their experiences.

The paintings of Charles Gniech and the sculpture of Corinne D. Peterson will be presented at Gallery 180 of The Illinois Institute of Art-Chicago through July 19. Previews begin on May 7th. An Opening Reception will take place on Friday, May 11 from 5:30-7:30 pm. All works are available for purchase. Gallery 180 is located at 180 N. Wabash—at the corner of Lake and Wabash—in Chicago’s Loop. The gallery is open Monday through Thursday from 8am-8pm, Friday 8am-5:30pm and Saturday 9am-5pm. Additional information can be found at gallery180.com.
.
Posted by Chuck Gniech at Saturday, April 14, 2012 No comments: 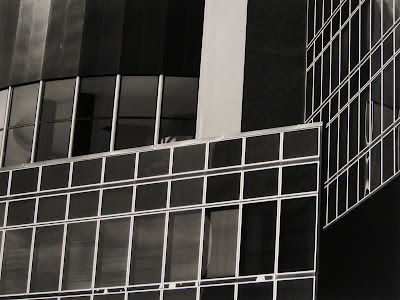 Above: Ken Konchel, "Interaction"
Last week, Ken Konchel received a wonderful review in the art section of "Newcity". Writer, Michael Weinstein, begins his review defining Konchel as a "Hardcore architectural abstractionist". The review continues with an eloquent description of the compositional choices found within the black and white imagery. Read Weinstein's review in its entirety at: art.newcity.com
The photographic images of Ken Konchel will be presented at Gallery 180 of The Illinois Institute of Art-Chicago through May 3rd. The Gallery is located at 180 N. Wabash in Chicago's Loop. The exhibition is free and all works are available for purchase.
.
Posted by Chuck Gniech at Thursday, April 05, 2012 No comments: