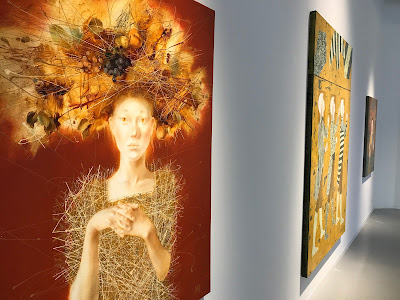 An exhibition of paintings by Igor Kozlovsky & Marina Sharapova—better known in the art world as Igor & Marina—is currently on view at the Zolla/Lieberman Gallery in Chicago’s River North neighborhood. The show—titled Classic. Witty. Mysterious.—is a spattering of imagery, selected from various bodies of work that have been created over the past five years (2012–2017). The imagery remains consistent in technique with beautifully rendered porcelain figures presented against an array of gorgeous backgrounds—uniquely perfect for each individual canvas. Surprising symbolism is injected throughout the show. 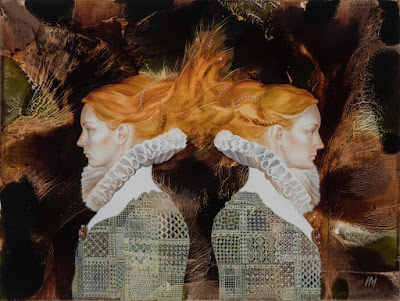 Amulet, an oil on canvas painting measuring 36 x 48”, depicts two beautifully ghostly figures—standing back to back and connected by their flowing red hair—woven together and adorned with pearls. The wonderful shapes within the background, mimics the hair's frayed loose ends. The figures become apparitions, dressed in fashionable attire covered with gridded modules of transparent pattern. Each wears an amulet around their neck as a symbol of protection from an entity that seems to blow through them. 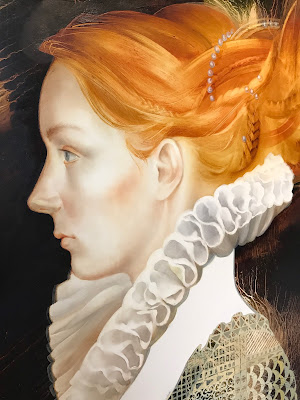 Igor & Marina’s subjects seem to focus primarily on women and children. The paintings offer a re-imagined approach of classic paintings from which the compositions are derived. But this imagery becomes timeless through the hands of this prolific duo. The eternal characters are dressed in period fashion which at times, could vary well be surealist couture. Amazing imagery. 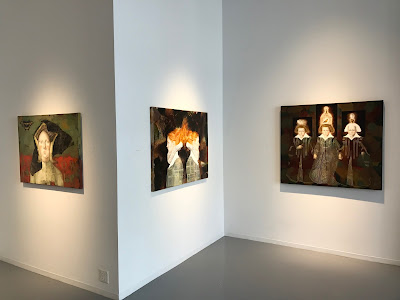 Igor & Marina’s Classic. Witty. Mysterious. will remain on exhibition at the Zolla/Lieberman Gallery—located at 325 W. Huron, Chicago, Illinois—through May 20th. Additional information may be found at: zollaliebermangallery.com or by calling 312.944.1990
.

Yale Factor: "4 Decades" at the Zhou B Art Center 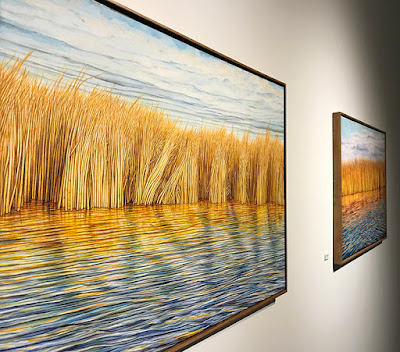 In the mid 1980s, I was studying Illustration at Northern Illinois University. To my recollection, the program offered two professors with which to work… Jay Paul Bell and Yale Factor. Both were amazing father figures who had high expectations of their students and—as with most children—the students never wanted to disappoint them.

As well as being talented Illustrators, both Jay Paul Bell and Yale Factor were—and continue to be—fine artists. For most of his career, Bell has been producing beautiful large-scale paintings of rural landscape… not too strange considering NIU’s cornfield location. But Factor has moved through numerous subjects of passion—from beautiful graphite renditions of faces, to obsessively complex painted landscape, and personalized still life compositions that play with the viewer’s sense of reality. The work of Yale Factor presents a compulsively detailed exploration of the subject. And for the past five weeks, the evolution of Factor's career has been on display in a retrospective titled “4 Decades” at the Zhou B Art Center in Chicago. 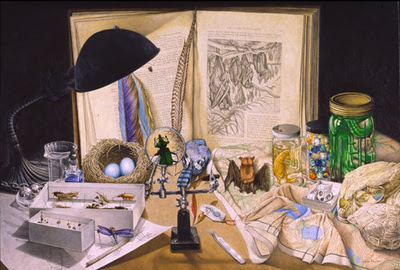 I visited the exhibition last night. It was beautifully staged with a central alter of paintings, which I believe were produced in the 80s. They offered ridiculously detailed, old-world renditions of the acquisition of knowledge… Opened books presenting scientific illustrations accompanied by various lab specimens, or wrinkled roadmaps defining a journey intertwined with unique personalized objects. The paintings are intriguingly unique. 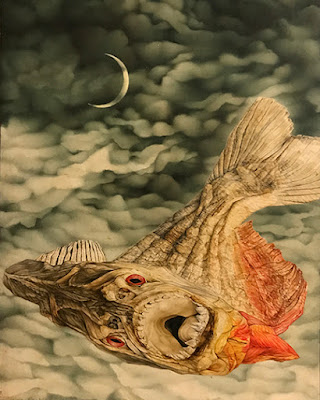 But as I explored the room, I found—on an exterior wall—an intimate study of a gasping piranha. I was intrigued with this image: A beautifully rendered powerful animal, struggling to breath…mouth open exposing its razor sharp teeth—body wrenched… searching for the water from which it was taken. The incident takes place against a soft-focus surreal achromatic background—perhaps an oil stained beach or haze induced sky. Conceivably a comment on the current global climate crisis?

The exhibition closed last night during a “Third Friday” event but the opportunity to view Factor’s work remains. He has a studio/gallery within the Zhou B Art Center, located at 1029 W. 35th Street in Chicago, Illinois 60609. Contact him at: yalefactor@gmail.com, or by phone at: 815.762.5243
Posted by Chuck Gniech at Saturday, April 22, 2017 No comments: