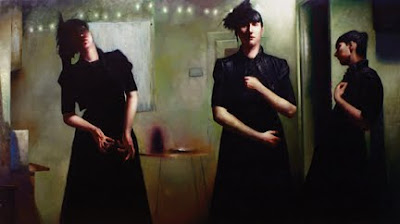 On January 16th, Gallery 180 of The Illinois Institute of Art-Chicago will open “human” …an exhibition of fine art, from around the country, that explores the human form as well as the human condition. The work includes a variety of painting, drawing, photography and sculpture. In the coming weeks, I'll be highlighting some of the pieces selected for the show... with a little background on the artists that created them.

E. Thurston Belmer contributes an intense, large-scale painting to the exhibition. The painting measuring 138” x 78”, is titled “Jean Porter Green.” Belmer explains the painting as a presentation of embodied trauma. He continues…

“…The scarred green background against the stark black fabric of the figures emphasizes the distance between the figures and the psychological space in which they inhabit. This image is overbearing in its scale, and like the presence and shock-realization of a traumatic experience, “Jean Porter Green” inhabits and recalls painful psychological states. The painting mimics that which we endure; it is the hardships and unavoidable trials that inform who we become. The figures function as a representation of each individual viewer, or a vacant body where experience fills out and completes each form. “Jean Porter Green” operates much like daily interactions between intimate bodies. These moments are fundamentally abstract and intangible, as “Jean Porter Green” presents an emotional and fragmented reality.”

Commissions from the sale of work, included in this exhibition, will be donated directly to Heartland Alliance to help with their work supporting Human Rights and needs. The exhibition will run through March 1st with an opening reception scheduled for Friday, January 20th 5:30-7:30. Gallery 180 is located at 180 N. Wabash—at the corner of Lake and Wabash—in Chicago’s Loop. The gallery is open Monday through Thursday from 8am-8pm, Friday 8am-5:30pm and Saturday 9am-5pm. Additional information can be found at gallery180.com.

E. Thurston Belmer was born in Boston, Massachusetts. He currently lives and works in Saint Louis, Missouri. Belmer’s work was recently featured in national publication Direct Art Magazine with a six page spread and the back-cover. Belmer’s work has been exhibited nationally including: New York, Chicago, Missouri, Connecticut, Massachusetts, and Virginia. Recently Belmer exhibited at Murray State University in Murray, Kentucky. He has also exhibited at the Danforth Museum of Art, in Framingham, Massachusetts in Boston Printmakers Biennial 2011, which was juried by Jim Dine.