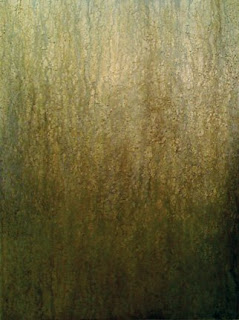 Image: Charles Gniech, Meditation III, 2009, acrylic on canvas, 48x36"
"Meditative Surfaces" will be on exhibit at the Schoenherr Art Gallery of North Central College in Naperville, Illinois from July 24 through August 21 with an opening reception on Friday, July 24 from 6-8pm. The reception is free and open to the public. An overview from the press release follows:

This is a powerfully inspirational exhibition focusing on meditative surface patterns. The exhibition brings together the work of Painter; Charles Gniech, Mixed-media Artist; Deanna Krueger, and Photographer; Maggie Meiners. These three Artists are inspired by their own—very different—individual passions, yet the work comes together to present a united statement of introspection.

Influenced—for more then a decade—by the hundreds of the pre-historic stone circles throughout Great Britain, Charles Gniech is inspired by the natural stone patterns found on the surface of Megaliths. Gniech references and manipulates these patterns to create meditative imagery on which to ponder. Defining his work, Gniech explains:

“I have spent more then a decade exploring the meditative qualities of the prehistoric stone circles of Great Britain. Britain is littered with more then four-hundred and thirty of these prehistoric sites... most people are familiar with Stonehenge, yet there are areas concentrated with megalithic structures as far to the north as the Scottish Islands, and as far to the south-and west-as Cornwall. The largest complex of circles is just to the north of Stonehenge, at Avebury. My latest body of work is influenced by the meditative qualities of the fluid surface patterns found on some of these monuments. I have taken some artistic liberties, in the replication, manipulation and abstraction of the surface patterns found on these massive stone slabs, yet the work continues to convey the serene qualities regularly associated with nature and inner peace.” 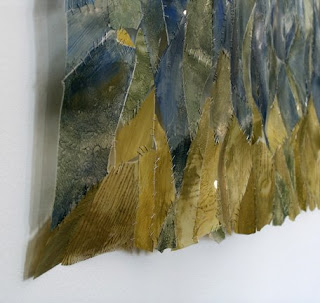 “I am interested in humanity's collective search for meaning in the absurdity that is this life, and in the pleasure to be found in the various manifestations of that search.”

“…Serving as a marker of this time of transition, the materials speak to the recent evolution of information storage. When virtual documents replace paper, the lowly staple will become an artifact of an earlier information age. Modes of diagnostic imagery are shifting as well: X-Rays and MRI scans are increasingly being recorded solely in the digital realm.” 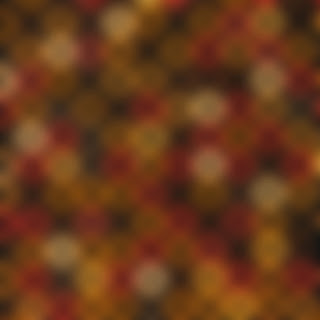 Above: Maggie Meiners, Slick, c-print, 40x40"
The large-scale abstract photographs of Maggie Meiners come from her “Childhood Contemplations” series. The mere size of these forty-inch square digital c-prints, allows the viewer to become engulfed by the imagery and to explore their inner mind. The various color patterns are meant to trigger memories on which to contemplate. In defining this body of work, Meiners explains:

“Although the use of blurred imagery seems to defy logic, this intentional shift in focus is meant to transfix and then transport the viewer to a mind space where memories run wild. Various spectrums of color are used as a guide to revisit and explore memories of the past.”