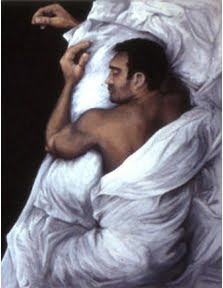 I spent much of this past Wednesday, trying to get back to Chicago in time for Christmas. We were leaving Southern California while a winter storm covered much of the Midwest. The flight boarded a half hour later then expected but all seemed hopeful. Then—as we taxied to the runway—the engines slowed and the Pilot's voice came over the intercom to tell us that we would be sitting on the tarmac waiting for clearance to take off. As the stories of imprisoned airplane passengers ran though my head, I reached for a book from my carryon bag: Edward Winkleman’s “How to start and run a Commercial Art Gallery”.

I purchased this book online after spending some time on Winkleman’s blog. I was looking forward to acquiring some of Winkleman’s industry insights. I have been running Gallery 180 of The Illinois Institute of Art-Chicago for the past six years, but I have to admit, It’s not the typical startup gallery. Gallery 180 is basically funded by The Illinois Institute of Art-Chicago. The school covers all of the costs of running a space… rent, promotion, receptions… and the proceeds from sales are used to purchase work for the School’s Fine Art Collection. I don’t have to worry about work selling, yet it does. The focus of the gallery is inspiration and education.

The only truly commercial gallery venture that I've entered into was the creation of Gallery H. A few years back, I was asked—by one of my collectors—to help open a high-end gallery in a little town in Michigan. I was perplexed but listened with an open mind. The answer came quickly. The gallery would be located in Three Oaks, which is a-stones-throw away from some extravagant homes on the shores of Lake Michigan and the surrounding farmland. I helped open the space and that experience —in itself—was enlightening. The gallery was very lucrative in the first two years, yet at the beginning of the third season, I stepped away to focus on creating more of my own work.

So, why was I so interested in Winkleman’s book? The answer is threefold. I thought that his words might give me some new insights, which could benefit Gallery 180. Secondly… maybe there was more to learn about the art market… information, which could benefit me as an artist as well as a curator. And finally, perhaps I will—one day—open my own space.

I opened the book to the table of contents and found that it outlines the fine art world from a business perspective. Hardly the summer beach read, but quiet intriguing for people in the industry. The book covers the basics of opening and operating a gallery including the importance of a written business plan, managing cash flow and a wonderful chapter, which covers crating and shipping… information beneficial to all working artists.

As we sat on the tarmac waiting for departure, I had reached the chapter on crating and shipping. I smiled, reminded of a situation I had to deal with a few years back—wishing that I would have had this book to read back then. I sent a seven by four foot painting to a gallery in California and on the return trip, it seemed that a forklift had punctured the sturdy wooden crate [see Winkleman, chapter 9, for suggested specs]. The painting was torn but there is an up side to this story. When the painting was first shown at the Fine Arts Building Gallery in Chicago, one of the patrons was quite taken with the canvas but the scale was much too large for his home. A few days after receiving the damaged painting—and with no better options—I decided to crop and re-stretch the image. Within the week, that interested collector had heard of the mishap and contacted me to inquire if he could purchase the newly revised version. That re-titled version “The Edge” is shown above. The original version, “Edge of Tomorrow” is shown below.

In any event, check out the Winkleman book. It’s filled with wonderful insights for artists as well as potential gallery owners. You can find "How to Start and Run a Commercial Art Gallery" at amazon through this link. 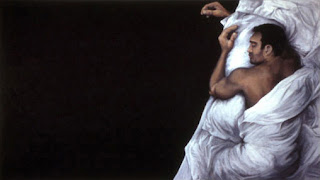 Additional information on these pieces can be found at gniech.com
Posted by Chuck Gniech at Saturday, December 26, 2009