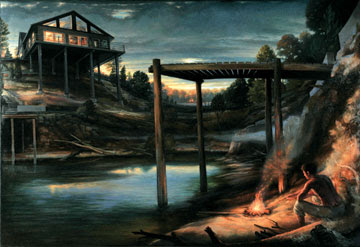 The National Juried Exhibition titled "Visual Narrative" opens this Friday at Gallery 180 of The Illinois Institute of Art-Chicago. The focus of the exhibition is fine art that tells a story. The works—varied, as in any group exhibition—have a common thread. All of the pieces seem to focus on the human condition—the experiences of being human in a social, cultural and personal context. The work addresses: who we’ve become, what we’ve created, and how we relate to one another. Some of the pieces are quiet, subtle and introspective while others emerge confrontational. Yet, each piece invites the viewer into a unique world in which the artist shares an observation of the human experience.

One of the artists presented in the exhibition is David Hannon. Hannon—an Assistant Professor of Painting at Ball State University—uses his abilities to bring attention to current global issues. "Summer Drought" [48x70" oil on canvas, shown above] presents the image of a single figure sitting by a fire in a dried out lakebed. The image clearly addresses the global warming crisis. In defining his painting, Hannon explains:

“In the early stages, I became interested in the exposed surface of a lakebed as a setting; an area that would normally be under water and not typically thought of as beautiful. This exposed landscape metaphor became important to the development of the overall significance of this painting. The main narrative is centered on the idea of being exposed to natural forces such as drought and how people deal with environmental change through the spaces they inhabit. The main character has been stripped of every modern convince left only with the ability to create fire, but he is enjoying nature. The unseen people, in the cliff house above, are locked away in the safety of a completely artificial world probably annoyed at the lack of water in the lake. The steep banks of the lake allow the modern cliff house—with metal poles to contrast the exposed wooden dock—to hint at the theme of old versus new. In these times of economic downturn, I wonder if we as a society can once again experience the world in a purely natural way without the use of high definition television.”

“Visual Narrative” will be presented at Gallery 180 of The Illinois Institute of Art-Chicago through July 22nd. This exhibition is free and open to the public. Works are available for purchase. An exhibition catalog for Visual Narrative is available. Gallery 180 is located at 180 N. Wabash—at the corner of Lake and Wabash—in Chicago’s Loop. The gallery is open Monday-Thursday 8am-8pm; Friday, 8am-5:30pm; Saturday, 9am-5pm; closed Sunday.