Cheryl Jefferson, Author of "Death of a Raks Star" 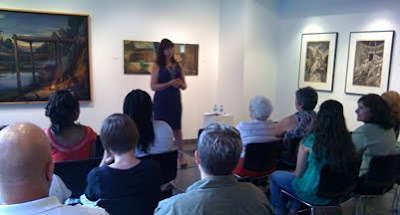 This evening at Gallery 180 of The Illinois Institute of Art-Chicago, Cheryl Jefferson read from her soon-to-be released book, "Death of a Raks Star", The lecture began with some painful statistics and ended with an interesting discussion about this human rights issue.

"Six thousand Middle Eastern women a year are reported honor killed by their families. Annually, twenty-thousand more female deaths go unreported. What did these women do to "deserve" it? Some learned to read without their father's permission. Others used the Internet or burned their husband's dinner. Many were raped by a male relative or friend, then held responsible because they "made" the rapist do it. A defiant few publicly performed raks sharqi - belly dance - a sacred rite of female strength and power for two thousand years, now the dance of death..."

Bringing attention to this human rights issue seems to be Jefferson's passion. Utilizing Gallery 180 as the venue for a literary event seemed obvious due to the content of the current exhibition. "Visual Narrative" is a national juried exhibition which presents fine art that tells a story. Initiating change is the purpose for the creation of fine art. Visual artists—as well as writers—want to communicate and connect with people. Their work becomes the voice by which they can question, document, inform, or proclaim a perspective. Artists ask questions and attempt to explore ideas …ideas which may remove the audience from their comfort zone. “Visual Narrative” seems to ask who we are as a society and how we relate to one another. Jefferson's lecture is an attempt to begin a dialogue for individual and social change.

The "Visual Narrative" exhibition will conclude on July 22nd. Additional information about the show can be found at gallery180.com. The gallery is open Monday-Thursday 8am-8pm; Friday, 8am-5:30pm; Saturday, 9am-5pm; closed Sunday.

Jan Baiden was unable to present tonight, due to illness.
Posted by Chuck Gniech at Wednesday, July 21, 2010