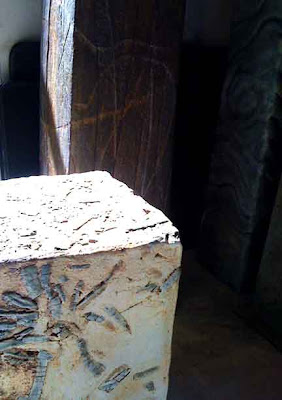 A huge fan of her sculptural work, I bookmarked Corinne Peterson’s web site months ago …A couple of weeks ago, I contacted her to request a studio visit. One morning last week, I met with Corrine Peterson at her studio in Ravenswood.

When I arrived at Peterson’s studio in the Lillstreet Art Center, I met a woman who—I knew—had a story to tell. As she offered me a seat on one of her sculptures, I could see the knowledge of an incredible lifetime peering out through her eyes. I asked her to tell me about herself and about the work she had created. She sat down on a nearby sculpture, slipped on sweater and began to share the stories of how she arrived at this particular point in her life. As we spoke, I found myself exploring the room filled with a variety of works from the recent past. The works were spiritual and introspective. The tactile qualities of the meditative ceramic monoliths define a place in time from prehistory—a topic reflected in my own work. I was intrigued. I had found an artist with a perspective, similar to my own, with a three-dimensional outcome. 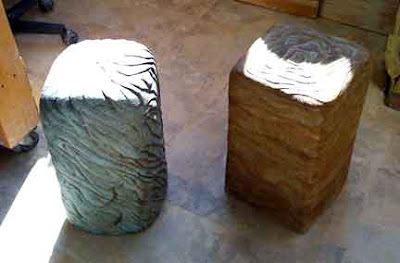 Peterson began her journey roughly 25 years ago. Working as a psychotherapist, and now a successful Chicago-based sculptor, Peterson tapped into Jungian analysis to find her way to making her amazing monuments. Jungian analysis is a type of therapy that encourages attention to dreams and art in exploring one’s life. Peterson’s dreams stem from growing up on a farm in Minnesota, with fond memories of a nearby clay bank. The clay—and the influence of markers found in the French countryside—eventually evolved into ceramic monoliths representative of the mile markers of Peterson’s life. In a 2007 article in Ceramics: Art and Perception [issue 69], Peterson points out that she is still working with her dreams which allows her to stay acutely aware of the border between the conscious and unconscious, while exploring both.

I plan to present an exhibition of Peterson’s work early next year. Perhaps, I will be exhibiting with her. Until then, you can find her work at: cdpeterson.com 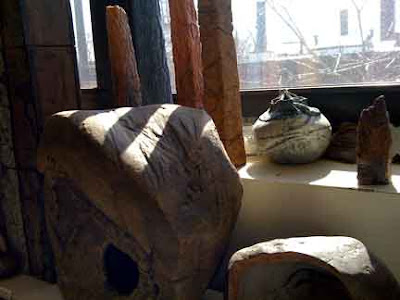