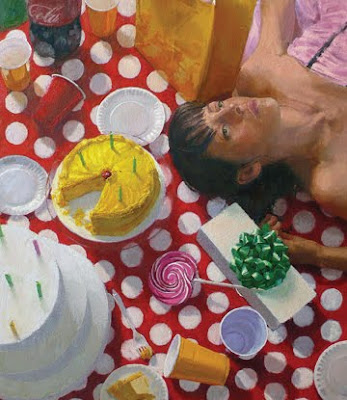 "human" will be the second time that Nicole McCormick Santiago will be included into an exhibition at Gallery 180 of The Illinois Institute of Art-Chicago. Her beautiful brightly-painted narratives become a bitter reminder of the comma our over indulgent society will face, lacking moderation. A similar theme is addressed by Pamela Michelle Johnson's glutinous super-sized paintings of confectionary delights currently on exhibit at Gallery 180. McCormick Santiago's two paintings... "Indulgence" and "Indulgence II" have been selected for the "human" exhibition, opening for previews on January 16th. McCormick Santiago explains the intent of her paintings:

As the title implies, “Indulgence” and “Indulgence II” are images, which reference excess. These images are loosely based on Pieter Bruegel the Elder’s work, Land of Cockaigne, wherein Bruegel depicts a land of opulence and ease, far from the truly discordant reality. By overindulging in the surrounding goodness, Bruegel’s inhabitants fall into a gluttonous stupor, no longer useful or productive. I am contemplating some of the same ideas of bounty, immoderation, gluttony and sloth in the Indulgence images. Not unlike the inhabitants of Bruegel’s image, the figures “Indulgence” and “Indulgence II” have surrendered to their surroundings, becoming inactive as a direct result of their immoderation and excess.

"human" opens to previews on January 16th with an Opening Reception scheduled for Friday, January 20th from 5:30-7:30. All work will be available for purchase with commissions donated to Heartland Alliance. Gallery 180 is located at 180 N. Wabash—at the corner of Lake and Wabash—in Chicago’s Loop. The gallery is open Monday through Thursday from 8am-8pm, Friday 8am-5:30pm and Saturday 9am-5pm. Additional information can be found at gallery180.com. 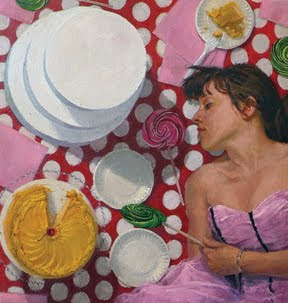 Nicole McCormick Santiago received her BFA from Indiana University and her MFA from the University of New Hampshire. She currently holds the position of Assistant Professor of Studio Art at the College of William & Mary. Her work has been featured in such publications as the Artist’s Magazine and the International Painting Annual 1 (INPA-1). Nicole has shown in over 70 group, juried, and solo exhibitions. She is currently represented by First Street Gallery in New York.
.
Posted by Chuck Gniech at Saturday, December 17, 2011