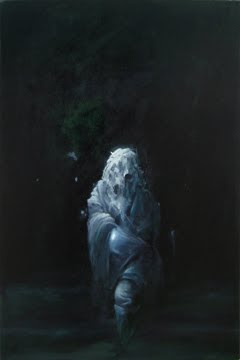 The average snowfall in a Chicago winter is 38”. We had eight of those inches on Friday, January 20th …. the night of the opening reception of the human exhibition at Gallery 180 of The Illinois Institute of Art-Chicago. Surprisingly, the reception was jam-packed. Artists and patrons had driven for up to five hours—over snow-covered highways—for a look at this collection. Two of the Artists from St. Louis even attended.

“human” is a national juried exhibition with the commissions from the sale of work to benefit Heartland Alliance for Human Needs & Human Rights. The show is comprised of work by twenty artists from around the country. Recently, I was asked if there is a common thread that ties the work together. The obvious answer is that the work relates to the human form or the human condition. But after thinking about the question for a minute another response emerged. The work—ranging from strangely grotesque to classically beautiful—seems to be about the unconscious. The images seem to reference how we perceive the human condition while we sleep. Dreams and nightmares are the common subject of the work contained in “human”.

One of the twisted—nightmarish—pieces that I was enthralled with when selecting the exhibition, was an untitled painting by Adrian Cox [above]. Cox refers to the figures presented in this recent body of work as “…horrific, violating every natural state as their borders undergo deformation… …intended to mitigate reactions of fear and disgust.” And I’m intrigued. Below is another sample from the new series. This small piece, titled "Coagulation", seems to be a highly distorted self portrait. The image makes subtle visual reference to the artist's physical appearance with clear distortions. The artist's statement talks of the disappearance of the exterior physical shell... a place where the interior and exterior of the flesh mingle... having no boundaries. You can find the artists statement in its entirety—along with this and other images from his recent body of work—at: adriancoxart.com. 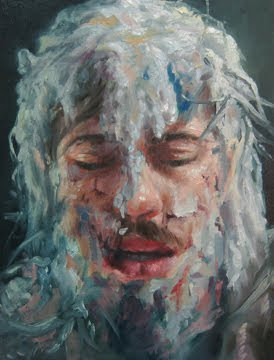 The untitled piece by Adrian Cox, as well as thought-provoking work by nineteen other artists can be seen at Gallery 180 of The Illinois Institute of Art-Chicago, through March 1st. Gallery 180 is located at 180 N. Wabash [at the corner of lake and Wabash] in Chicago’s Loop. All work is available for purchase with commissions donated to Heartland Alliance for Human Needs & Human Rights. The show can also be seen online at gallery180.com.
.
Posted by Chuck Gniech at Sunday, February 05, 2012