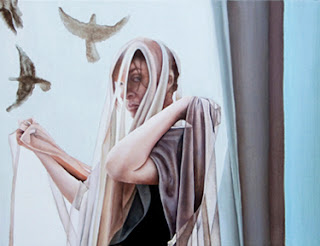 "The Art of Influence: Breaking Criminal Traditions" is an exhibition that was created to raise awareness of the global atrocities that have become traditions in various cultures. The exhibition is meant to begin a dialogue, which will lead to additional dialogue between the US and citizens of effected nations—supporting those citizens as they work for the cultural change that can only come from within.

Author, Cheryl Jefferson is the driving force behind the exhibition. Her knowledge of Criminal Traditions has allowed her to speak at the UN and present a TEDTalk. Jefferson's passion is obvious...  and the injustice perverse. She explains:


Worldwide women live too close to their bones and too far from their dreams, the victims of criminal traditions. Criminal traditions are ongoing, centuries old rituals that kill or maim millions each year yet aren't considered crimes. They include honor killing, acid attacks, bride burning, forced childhood marriage, female genital mutilation and other violence that is not illegal because the perpetrators are relatives who are doing "what's best" for the girl or "defending" their family's honor.

"The Art of Influence: Breaking Criminal Traditions" will run through February 6th. Many receptions are planned. I will be blogging about them in future posts. Additional information will also be available at BreakingCriminalTraditions. com

Barbara Simcoe has been a working artist for more than thirty years. Her formal art training was at the University of Illinois, Urbana and the University of North Texas, Denton. She lived and worked in Dallas 16 years where she was very involved in the art community and in exhibiting her work. Currently residing in Omaha, NE she is a Professor on the faculty of Art and Art History at the University of Nebraska and has taught painting and drawing since 1998. Barbara has shown widely in nationally and in European venues in many invitational and juried exhibitions. She has had numerous one person exhibitions, awards and grants, in 2004 she received a Fulbright Grant for which she lived, taught and made artwork in Lithuania. She traveled to Israel summer 2005 to participate in an international exhibition in the city of Akko. Academic year 2006-07 she was on sabbatical, the focus of which was working in the studio and a trip to Poland where she had a solo exhibition of her digital photos at the Albert Gallery in Krakow. Most recently she had a one person exhibition in the Czech Republic for which she showed digital photo collages influenced by a trip to France summer 2008. Barbara’s work consists of oil paintings, graphite and ink drawings and digital photography. Stylistically she works with realistic figuration inhabiting psychological and symbolic spaces. Her website may be found at barbarasimcoe.com.