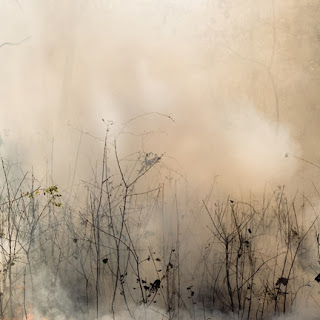 Award-winning Fine Art Photographer, Jane Fulton Alt will discuss her recently published book, The Burn, at the Book Release Party hosted by the DePaul Art Museum, on Thursday, November 7th from 6-8pm. The work captures the beauty and violence of controlled prairie burns. The photographs are a mystical journey into the place between life, death and rebirth. Fulton Alt explains:


While observing controlled prairie burns, I was drawn to the ephemeral quality of the moment when life and death are not contradictory but are perceived as a single process to be embraced as a whole.

The beginning of this project coincided with my sister’s diagnosis and treatment of ovarian cancer, more than four years ago. The parallels between the burn and chemotherapy were immediately revealed to me. Just as the burning reduces invasive vegetation that crowds out native plants, chemotherapy destroys unwanted growth, allowing for new healthy cells to establish themselves. These images were created and inspired with this deeper awareness and understanding of the life cycle.

The Burn, book release party will take place on Thursday, November 7th from 6-8pm—Fulton Alt will speak at 7pm—at the DePaul Art Museum located at 935 W. Fullerton Avenue, Chicago. Admission is complimentary. This event is presented in cooperation with The Ragdale Foundation and the DePaul Art Museum.

Jane Fulton Alt, a Chicago native, received her BA from the University of Michigan and MA from the University of Chicago. She studied art at the Evanston Art Center, Columbia College and the Art Institute of Chicago. Her work is in the permanent collections of the Museum of Fine Arts in Houston, Smithsonian National Museum of American History, New Orleans Museum of Art, De Paul University Art Museum, Southwest Museum of Photography, Beinecke Library at Yale University, Centro Fotografico Alvarez Bravo in Oaxaca, Mexico, Center for Photography at Woodstock, Harry Ransom Humanities Research Center, and the collection of William Hunt. Alt is the recipient of the 2007 Illinois Arts Council Fellowship Award, the 2007-2009, 2011 Ragdale Foundation Fellowships and winner of Critical Mass for her Katrina and Burn portfolios in 2007, 2009 and 2011. She has authored Look and Leave: Photographs and Stories of New Orleans’s Lower Ninth Ward and her Crude Awakening portfolio was been picked up by multiple publications worldwide. Most recently she received the Photo District News 2011 Curators Choice Award. Jane Fulton Alt is represented by the Corden Potts Gallery in San Francisco.