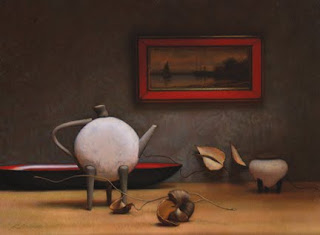 I've always been intrigued with the paintings of Indianapolis Artist, Lorraine Sack. Over the years, I've juried Sack into a number of exhibitions and I'm always astonished with her superior technique and the brilliant imagery she produces. Sack submitted some of her recent pieces to "red" the National Juried Exhibition to be presented at Gallery 180 beginning in mid September. I selected this wonderfully symbolic still life to be included in the show. The piece—titled "Sea Captain"—is an oil painting depicting two ceramic pots, organic pods, and a red bowl positioned on a wooden table. A small painting of a seascape is hung on a beautifully patterned wall behind the unusual grouping. In an email, Sack explained…

I've always loved the character and attitude the teapot holds. It has such a feeling of movement, like a sea captain standing at attention on his ship with his trusty mate (the matching smaller pot) near by. The authoritarian red and earthy tones seem to be the natural choices for color ...The background a stormy neutral, and the red highlighting the ship behind the Captain. The pods add an organic element, reminiscent of sails. The stems of the pods flow in a wave pattern which imply the presence of water.

Lorraine Sack’s “Sea Captain” can be seen during the “red” exhibition presented at Gallery 180 from September 14th through November 11th. A reception will be held on Friday, October 9th from 5:30-7:30. Gallery 180 of The Illinois Institute of Art-Chicago is located at 180 N. Wabash in Chicago's Loop. Additional work by Lorraine Sack can be found at: lorrainestudios.com