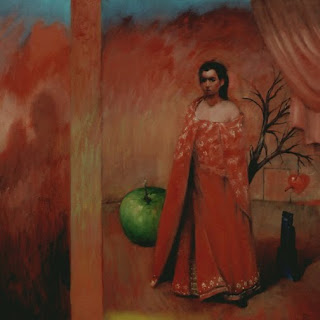 I recently completed the selection process for "red" a National Juried Exhibition to be presented at Gallery 180 of The Illinois Institute of Art-Chicago from September 14 through November 11. During the process, I found myself overwhelmed by the number of entries containing destructive and/or dark religious imagery. Looking for the bright side of this situation, I found work that contained some of that same messages but took it a step further. The content was much more cerebral. The symbolic imagery of Richard Laurent's "Kingdom" fits into this category. Like the symbolist painters of the early 19th century, Laurent's style is refined, elegant, subtle, and intellectual.

I met with Laurent an few days ago and asked him to tell me about his work. Over dinner, he explained that "Kingdom" was created while working on the series of oil paintings titled "Eve without Adam". Laurent later went on to describe "Kingdom" in an email...

The imposing green apple references Adam and Eve in Genesis. In this scenario, however, Eve is alone. In the biblical story, Adam and Eve are cast out from the Garden of Eden after partaking of fruit from the Tree of Knowledge. Is the serpent, then, the agent of corruption or is it the revelation of knowledge itself?

In this painting, the curtain pulls back on Eve to reveal her crimson vestments. She is poised to reveal herself to the world. The crimson garment represents her passionate disposition, the disposition of youth. Red is the dominant color. It mirrors her own red heart which, by extension, she has 'poured out' already.

Young Eve must choose between dualities: knowledge or ignorance, temptation or security, chastity or sexuality, future or past. It is time for her to discover her pathway in a hazy and unfamiliar environment.

A green apple is often thought of as more sour than sweet. So, too, the green apple of knowledge may seem bitter when compared to affairs of the heart. Shall Eve leave this kingdom for another based on her heart's desire alone?

The beauty of this work is that the symbols found within the story can be attributed to all of our lives. It causes us to question past temptations, choices, and then ponder the consequences of our actions.

Laurent's "Kingdom" can be seen—along with the works of thirteen other artists from around the country—at Gallery 180 of The Illinois Institute of Art-Chicago from September 14 through November 11. The Reception for the exhibition will take place on Friday, October 9th from 5:30-7:30. Gallery 180 is located at the corner of Lake and Wabash in Chicago's Loop. The exhibition is free to the public and all works will be available for purchase. Additional work by Laurent can be found at: laurentart.com