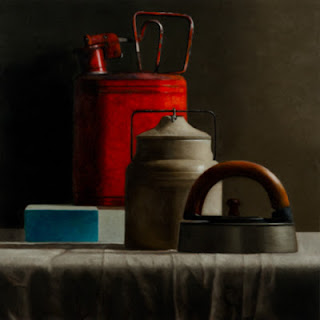 Carl Holzman is one of four artists participating is "Hyperreal", an exhibition of photo-realistic paintings, currently on exhibit at Gallery 180 of The Illinois Institute of Art-Chicago. His imagery is composed of weathered objects from the past, lit and tightly rendered with the focused-intent of a contemporary realist painter. The work conveys nostalgia–a longing for a simpler time. Holzman explains...


The paintings in this series reflect my continuing preoccupations with compositional austerity, textural variety (here conveyed through vintage objects rusted, chipped, patinated or otherwise distressed over time), and dramatic contrasts of light and shadow. The mid-century imagery, with its utilitarian shapes and weathered, plain-spoken character, undergoes an arresting transformation–a kind of abstraction or sublimation–under the influence of arrangement and lighting. Allusions to the recent past (objects) and the deep past (lighting, technique) are filtered through the sensibility of a contemporary painter, suggesting whispered dialog amid the suspended calm. 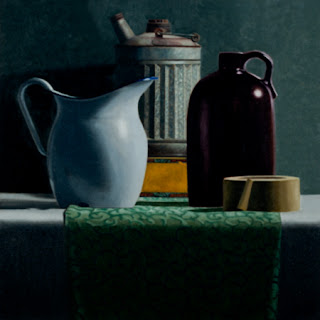 Carl Holzman's paintings are presented with the work of K. Henderson, Allan Gorman, and Roland Kulla. Hyperreal will be on exhibition at Gallery 180 of The Illinois Institute of Art-Chicago through February 28, 2013. All works are available for purchase. Gallery 180 is located at 180 N. Wabash—at the corner of Lake and Wabash—in Chicago’s Loop. The gallery is open Monday through Thursday from 8am-8pm, Friday 8am-5:30pm and Saturday 9am-5pm. Additional information can be found at gallery180.com. 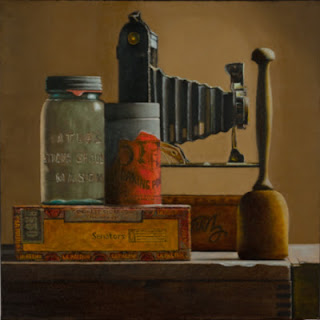 Although I have drawn and painted avidly since early childhood, I did not pursue art seriously until 10 years ago, when I began studying drawing and painting at The School of the Art Institute of Chicago, and later with portrait painter Richard Halstead. As my interest in painting grew, I found ways to scale back my day job until several years ago, when I took early retirement and dedicated myself full time to painting.