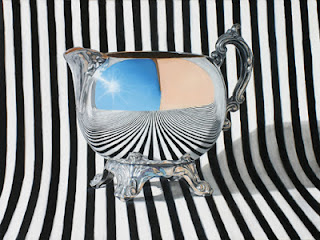 Tonight, Gallery 180 of The Illinois Institute of Art-Chicago will hold a catered reception for "Hyperreal" an exhibition of photorealistic paintings by K. Henderson, Carl Holzman, Allan Gorman, and Roland Kulla.

K. Henderson is known for her detailed oil paintings of contemporary still life. Hyperreal includes four of these pieces, which highlight pattern and reflection... and the reflection of pattern. Henderson uses these elements to create a complexity that intrigues the viewer into stepping closer—exploring each brushstroke. In discussing her work, Henderson explains:


Black and white striped fabric is simple. Yet when it is folded and draped the result is Complex Patterns. Add a reflective surface and you can get lost in the endless intricacies. Even the simpilest round globe or silver spoon refl ects a Looking Glass world as it distorts the uncomplicated into flamboyant and mysterious. A humble transparant goblet twists the world through which it is viewed and further alters the reflected shapes.

Hyperreal will be presented at Gallery 180 of The Illinois Institute of Art-Chicago through February 28, 2013. An Opening Reception will take place tonight from 5:30-7:30 pm. All works are available for purchase. Gallery 180 is located at 180 N. Wabash—at the corner of Lake and Wabash—in Chicago’s Loop. The gallery is open Monday through Thursday from 8am-8pm, Friday 8am-5:30pm and Saturday 9am-5pm. Additional information can be found at gallery180.com.


Born and raised in Oklahoma, K. Henderson now calls rural New Mexico home. Both locations have provided her with inspiration for her paintings. She is known for her detailed oil painting of contemporary still lifes as well as Western figures. Recent accomplishments include Purchase Award at the Art Renewal Center Salon, being awarded Best of Trompe L’Oeil by the International Guild of Realism, Top 50 in Salon International, inclusion in Scottsdale Salon of Fine Art, Settlers West American Miniature show,The Hubbard Museum of Western Art Biennale Grande winning 2nd place, and being featured in Southwest Art Magazine March 2008 issue and Sept 2008. Henderson won Peoples choice award Richeson 75 International exhibit, and Juror’s Choice Award Breckenridge Fine Art Center. She has gained Signature Membership status with the National Oil and Acrylic Painters Society. She has attained national recognition with her work, has attracted a growing audience of collectors and has received numerous awards including over 100 Best of Show and First place awards in national juried art shows. Her work has been in several solo museum and gallery shows and numerous group exhibitions including International Guild of Realism, Salon International, Western Spirit Art Show & Sale, Cowgirl Up! Show and Sale, C.M. Russell Museum Benefit Auction, Pastel Society of the Southwest, Pastel Society of America, Mt. Oyster Club, American Academy of Equine Art, Museum of the Cherokee, the Five Civilized Tribes Museum, The Bosque Conservatory, Oil Painters of America National and Regional, and National Oil and Acrylic Painters Society, Richeson75 figurative and small works exhibits among many others.

Henderson has been featured in Southwest Art Magazine and Oklahoma Today. She has been included in articles in Southwest Art, Art of the West, American Cowboy, Western Art Collector, American Art Collector, Art Talk, Santa Fe Circle, Cowboys and Indians and Art of the Hills. Her work has been in several books including “The American Indians: An Illustrated History” - Turner Publishing, “The Biographical Directory of Native American Painters” - Dr. Patrick Lester, SIR Publications, “Talking Leaves” - Eric Veitch, Verner Bendtsen, “Cherokee Art: Historical Precedents”, University of Georgia Press. She is a member of Oil Painters of America, National Oil and Acrylic Painter Society (NOAPS)
.