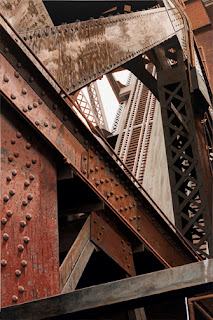 For the past twelve years, Chicago painter Roland Kulla, has focused his attention on the complex structures of bridges. With an obsession for detail, his work has evolved from hyper real imagery depicting idealized nuts and bolts to the current exhibition of hyper real and gritty functional railroad bridges.

Roland Kulla began his career as a fine artist in the late 90’s after more than thirty years as a caseworker, administrator, researcher, teacher and consultant. His early paintings focused on the heightened reality of the mundane—causing the viewer to take a second look at an object that would typically go unnoticed. 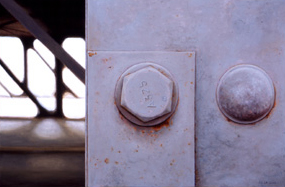 In 2003, the paintings progressed to consider the element of “rust”… the slow rot of the massive bridges. Time became a visual element within the work. Kulla utilized environment, blurred backgrounds, and the decay of previously hard edge metal forms. He defined the rust images as metaphor for his personal aging process as well as  making reference to the politics of the period.

By 2005, Kulla was working on a series of paintings that focused on tightly cropped bridge details with no true up or down. Most of the “Deco” images were produced so that they could be hung to the owner’s liking.

After 2005, Kulla began to explore bridge cities beyond Chicago. In 2006 he produced a series based on the bridges of Boston, 2007; New York, and 2008; Pittsburgh. By 2010 he created “Urban Patterns” an exhibition of paintings focusing on the bridges of New York and New Jersey. And by 2011; Berlin was the subject. 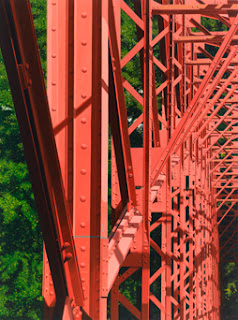 
“…In contrast to transportation bridges—where civic pride usually requires elements of conventional architectural beauty—the railroad bridge is all about function. It has to be strong enough to carry the heavy weight of loaded trains. Movable railroad bridges add another layer of complexity. This focus on solving a problem with maximum efficiency results in some amazing forms. They do not need to look pretty; they just need to get the job done.”

RR: New works featuring railroad bridges by Roland Kulla will be presented at ZIA Gallery from June 8 through July 20, with and opening reception on Saturday, June 8th from 5-7pm. ZIA Gallery is located at 548 Chestnut St., Winnetka, IL 6009. Parking is free and abundant.