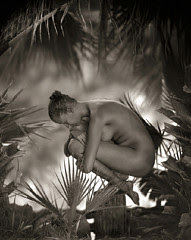 I was first introduced to the work of Ted Preuss when I juried an exhibition titled "Human" for The Illinois Institute of Art-Chicago. The group exhibition was presented in Gallery 350 during 2005. Preuss presented an image of a beautiful woman running her fingers through her long blond hair. The figure was photographed as a sculptural still life—nude—placed on a fabric-covered table—relaxed—in a moment seemingly meant for herself. The photograph, titled "Refine", defined a sense of peace while clearly being an exploration the way in which light falls of the human form. The work sold at the opening reception. Preuss was awarded a solo show, which was be presented in November of 2007.

Ted Preuss has generously donated a piece of his work to the Art Against AIDS benefit event. The piece titled "Desert Oasis I" [shown above], will be available at the main event on Thursday, February 26th at The River East Art Center. Additional work by Preuss can be seen at preussphotography.com
Posted by Chuck Gniech at Friday, February 20, 2009