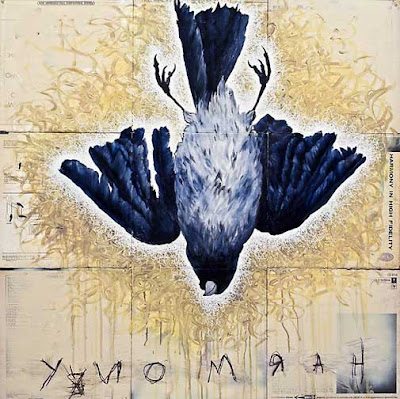 I receive an amazing number of exhibition proposals each month. As they arrive, they are opened and neatly placed in an organized pile in the corner of my office... waiting for me to put aside some time to focus on the contents. Well—for some reason— I was wide awake at six o'clock this morning and it seemed as though now was as good of a time as any.

I began with a proposal that landed in my mailbox weeks—maybe even months—ago. The materials were from James Walker, an artist who has been included in a past juried exhibition at Gallery 180. I believe two pieces were shown and both of them sold. His visually intriguing images are layered with collage, and then drawn into with oil, ink, and correction fluid. His elaborate drawings are a reflection of his surroundings. The imagery focuses on various segments of nature including birds, bone structures, and insects. Walker produces these studies as though documenting the anatomy of these creatures. They exude the impression of scientific illustrations pulled from a Biologist's journal. But Walker has recently begun to incorporate elements of Pop Culture into his imagery. Many of his recent works focus on skateboards... or are produced on actual skateboards. But Walker makes it clear that his work is a visual diary, a "documentary" about life... his life. He attempts to take nothing for granted, staying focused on every moment and documenting his journey.

In any case, take a few minutes to explore James Walker's web site. Be patient, the site is a little slow but the imagery is worth while.