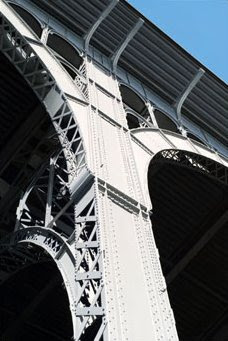 Generally speaking, I don't have a lot of free time on my hands. But I recently began a 15-week sabbatical from my teaching duties at The Illinois Institute of Art-Chicago, and what I've found is that I'm beginning to "catch up" with all of the things that I would try to accomplish while handling a rather intense schedule. So... I was sitting in front of my laptop trying to identify the next task to be addressed, and I realized that there was nothing immediately pending. Already at my laptop, I decided to spend some time exploring the numerous web sites which I've bookmarked in the past year or so... most of them containing works by artists that I wanted to review. And then I came across the site of an old friend.

I've known Roland Kulla for roughly fifteen years... basically from the beginning of his career as a fine artist. His work is amazing. His passion for the steel structure of a bridge is obvious. On his web site he declares "...I am fascinated by the functional dynamism of the bridge form. On the most fundamental level, the materials are arranged by engineers to get a job done. There is a rigid logic in the arrangement of bolts and girders... But while we use them, we don't usually stop to "see" them. I find beauty in this mundane reality and express it in my work."

Over the years, Kulla's work has become more and more obsessively detailed. His compositions have evolved to include hidden—or at least subtle implications of—secondary content. Kulla's love and passion for painting light, and the way that it changes in the evening sky, is an extra benefit for the viewer. Take a moment to review his web site. And if you have an opportunity to view the work in person, you won't be disappointed. You may be able to see some of these paintings this May at Art Chicago... most likely presented by the George Billis Gallery out of New York. Roland Kulla... Wonderfully Obsessive... And yes, the above image is a painting!